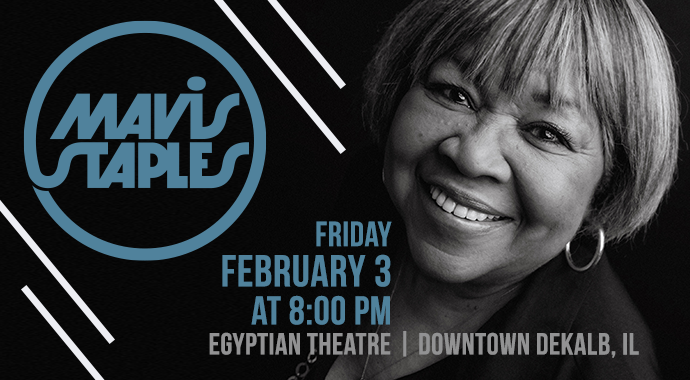 The NIU Concert Choir and NIU Black Choir will have the unique and exciting opportunity to perform on the same stage as music legend Mavis Staples as part of her concert, February 3 at 8 p.m. at DeKalb’s Egyptian Theatre.

A limited number of free tickets are available to NIU students who can pick them up at the Welcome Desk in the Holmes Student Center.

Hailed by NPR as “one of America’s defining voices of freedom and peace,” Mavis Staples is the kind of once-in-a-generation artist whose impact on music and culture would be difficult to overstate.

She’s both a Blues and a Rock and Roll Hall of Famer; a civil rights icon; a Grammy Award-winner; a chart-topping soul/gospel/R&B pioneer; a National Arts Awards Lifetime Achievement recipient; and a Kennedy Center honoree.

She marched with Dr. Martin Luther King, Jr., performed at John F. Kennedy’s inauguration, and sang in Barack Obama’s White House. She’s collaborated with everyone from Prince and Bob Dylan to Arcade Fire and Hozier, blown away countless festival goers from Newport Folk and Glastonbury to Lollapalooza and Bonnaroo, performed with The Band at The Last Waltz, and graced the airwaves on Fallon, Colbert, Ellen, Austin City Limits, Jools Holland, the Grammys, and more.

Tickets can be purchased at egyptiantheatre.org.