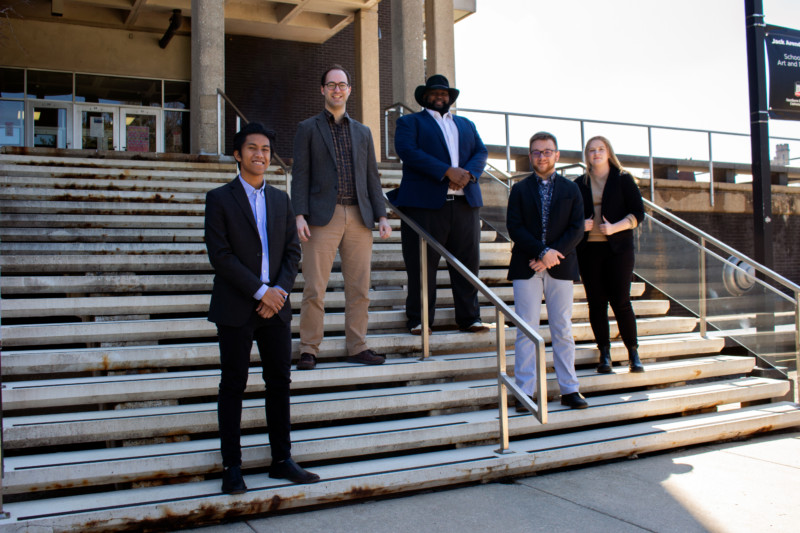 Five students from the NIU School of Music have been selected as one of just four combo/small ensemble groups from around the nation to participate in this year’s Jazz Aspen Snowmass Academy in Aspen, Colorado.

Throughout their time as students at NIU, they have joined together through their mutual love for long-standing groups like the early Miles Davis Quintet and Art Blakey and the Jazz Messengers. This understanding alongside influences by contemporary musicians like Mulgrew Miller, Roy Hargrove, and Kenny Garrett have shaped the Northern Collective’s sound.

The group aims to make music that honors the past while also hinting at the future. Collectively, they have worked with artists like NIU Professor of Music and Head of Jazz Studies Reggie Thomas, NIU Associate Professor Jazz Guitar and Jazz Studies Bobby Broom, Rodney Whitaker, and Jeff Hamilton among others. Members of the group have also received various accolades for Essentially Ellington, the Jack Rudin Jazz Championship, and the Jazz Institute of Chicago and have performed at venues like Fulton Street Collective, Merriman’s Playhouse, the Jazz Kitchen, Fitzgerald’s, and Elastic Arts.

The academy runs from July 10 through July 24, and their selection includes a full-scholarship that provides for their travel, lodging, tuition and meals.

“I’ve known about this program for a few years, and they added this small combo version it this year,” Arman Sangalang said. “Originally only big bands could audition. Kirby Fellis and I had been wanting to put a group together for a while. We thought this would be a great opportunity to get together and play with some of our friends. We all play together at school, but not necessarily in this kind of setting. It was great to do that.”

The audition process required the Northern Collective to record two arrangements. Austin Menk and Sangalang both brought in arrangements for the quintet to record and submit. And the entire group worked to provide the other supplemental materials needed for the audition.

Having their expenses covered allows the academy participants to immerse themselves in the experience without concerns about how much or how to pay. That’s something Sangalang is looking forward to.

“They really want us to be able to focus on music and to get to know the other people in the program. We will be in workshops with musicians from all over the country. It looks like we’ll be working with people like trumpeter Etienne Charles and Brian Lynch. We’ll be workshopping music and get master classes on all kinds of things, like the business side of music, improvisational techniques and things of that nature.”

There will no shortage of opportunities to play, as the combos will perform no fewer than seven times during the 14-day academy.

Jazz Aspen Snowmass works in conjunction with Frost School of Music at the University of Miami (Florida). This is the first year for the Combo/Small Ensemble Session, as Jazz Aspen Snowmass and Frost School of Music have expanded the program. This two-week intensive workshop will be followed by the established Individual/Big Band Session led by JAS Academy Artistic Director Christian McBride. McBride will work in tandem with Frost Dean Shelly Berg and Program Director Chuck Bergeron, who will work on both sessions. The other combos participating in the session with NIU are from the University of Southern California, Manhattan School of Music and the University of Miami (Fla.)

The goal of the JAS Academy is to identify and assist the most talented artists embracing jazz fundamentally while exploring myriad related & unrelated forms of music at the highest level of quality. While at the Academy, in addition to their studies and rehearsals, students will also be showcased at multiple public performances. Visit us here for a full list of showtimes and places.