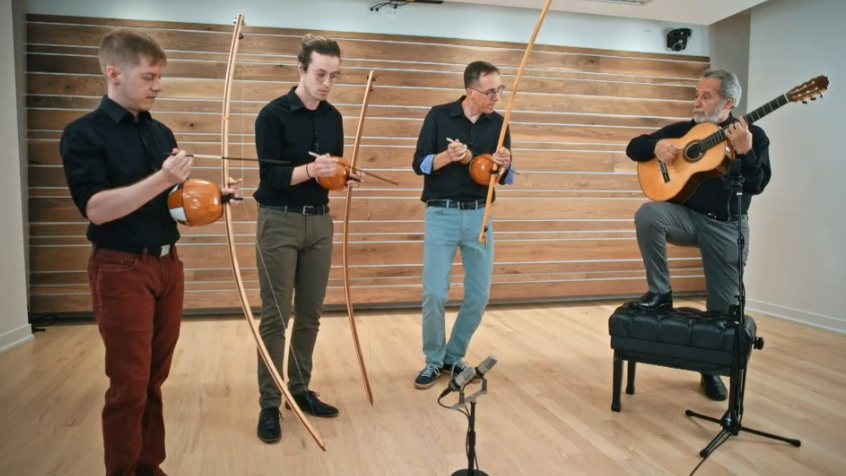 Gregory Beyer, Professor and Director of Percussion Studies in the NIU School of Music and percussion alumni Ethan Martin and Noel Streacker were recently featured on PBS’ “Now Hear This.” The three are part of Arcomusical, made up of Beyer and NIU Percussion graduate students and alumni, whose mission is “to spread the joy of the Afro-Brazilian musical bow known as the berimbau through the development of innovative and excellent musical repertoire.”

“Sergio Assad, one half of the famous Brazilian guitar duo, the Assad Brothers, lives in Chicago,” Beyer said. “He reached out to me to be involved with him in the episode and together we co-composed a work for classical guitar and three berimbaus that is premiered in the first segment. Working with Sergio was a delight. He is a consummate professional and a lovely and sensitive musician and human being. Making music with him for us was a joy and an honor. And co-composing the work was also delightful. I sent him an initial idea, he composed something for himself above what I wrote, and we continued ping-ponging the score back and forth until we were together happy with the final result. We hope to continue this collaboration in the near future.”

Beyer is featured twice in the episode. The first time at 26:25 when Martin and Streacker join Beyer and Assad. Beyer is featured again at 40:06 when he joins Assad and members of Gingarte Capoeira Chicago.

Arcomusical recently released their third album, Emigre and Exile, which has received a number of excellent reviews, including:

“Every so often an ensemble comes along that is dedicated to some sort of stylistic-meta-acoustical  way of playing-listening. The berimbau ensembles are inspired, beautifully sonic and a major reason to listen. But also the compositional approaches are all worth your attention over and above the sonic wonder of it as an entirety. The music pulsates in engaging ways. Everything has a kind of tribal folk-avant forward momentum, an elementally riff-like tonality, with repetition ostinatos not at all formulaic. This is not an ordinary sort of album. It is uplifting and unusual. I recommend it if you are wanting something different, something off the well beaten path. Bravo.” – Grego Applegate, April 19, 2022, Gapplegate Classical-Modern Music Review

You can watch Arcomusical’s album release party, which was held at Chicago’s Constellation.