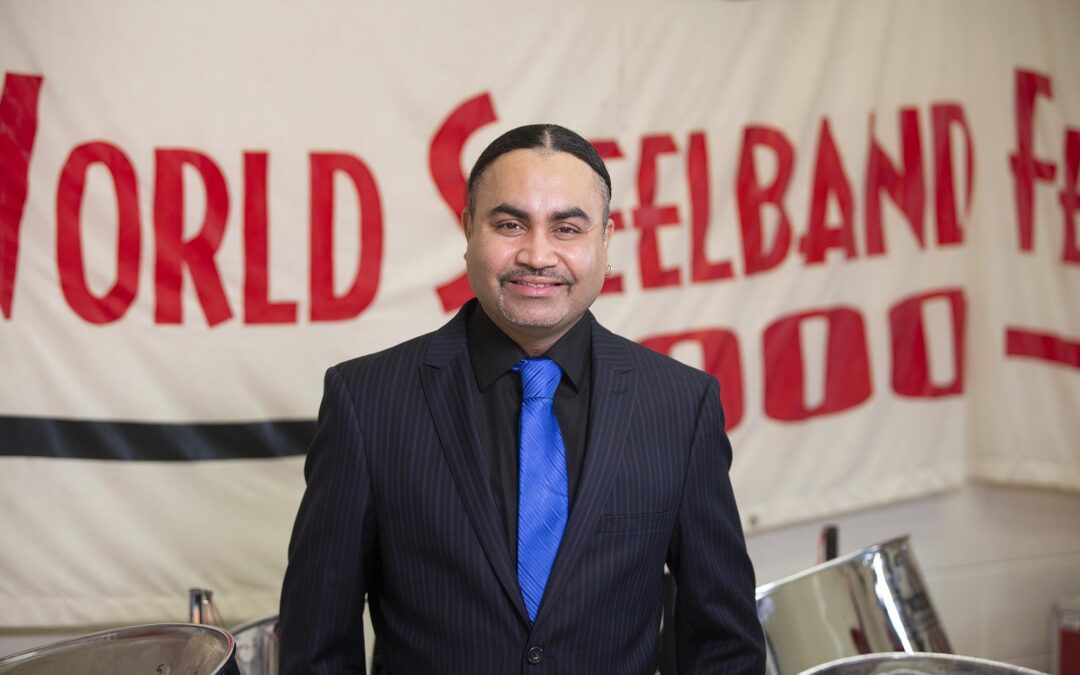 Liam Teague, Professor of Music and Head of Steelpan Studies in the School of Music has added to his impressive list of accomplishments with his selection as a 2022 Northern Illinois University Board of Trustees Professor. 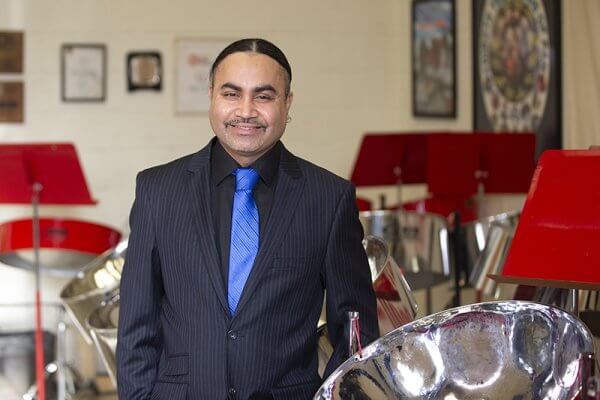 Liam Teague has been selected as a 2022 Northern Illinois University Board of Trustees Professor.

Teague is a world-renowned performer and composer. He is one of the leading figures in creating and commissioning new solo steelpan and steelpan orchestral works, many of which have been published and performed by esteemed ensembles like the National Steel Symphony of Trinidad and Tobago and soloists at venues like Carnegie Hall. He has performed at concert venues from Madison Square Garden, the John F. Kennedy Center for the Performing Arts in Washington, DC, Symphony Center in Chicago, the Teatro Nacional de Panama in Panama City, Teatro Nacional de Costa Rico in San Jose, to The Queen’s Hall in Port of Spain, Trinidad.

Teague was originally drawn to NIU as a student from Trinidad and Tobago to study under NIU Steelband founders Al O’Connor and Cliff Alexis. Teague was a 2018 recipient of an NIU Presidential Research, Scholarship and Artistry Professorship and has devoted the majority of the award to engaging composers to create innovative pieces for solo steelpan and with non-steelpan instruments (piano, violin, percussion ensemble, etc.) Several of these works have been embedded into NIU’s steelpan majors’ curriculum and Teague feels they will be beneficial to generations of steelpan musicians by providing access into musical avenues which have been largely untapped.

“Professor Teague is an inspiration. Deeply soulful and committed in his artistry, extremely careful and organized in his planning, Liam has cultivated a crystal-clear vision to transform the steelpan into an instrument of supreme virtuosity that can stand alongside the violin as a premiere concert solo instrument,” said Greg Beyer, Professor and Director of Percussion Studies at NIU. “As a result of his relentless pursuit of excellence, his reputation proceeds him nationally and internationally. He is known in percussion circles as the ‘Paganini of the steelpan.’ This is neither exaggeration nor hyperbole. Teague’s performances feature blistering virtuosity astonishingly delivered with clarity and grace.”

Recent NIU School of Music graduate Jaron Woodsley, who earned bachelor’s degrees in both music performance and music education, says Teague brings the world to the program. “He goes beyond the call of duty for his students, and others, in any way possible. Such is his commitment to his students that he does not want them to miss contact hours, so he has his lessons online wherever in the world he may be, even when there’s a significant time difference. He seeks out young and upcoming steelpan musicians from all over the world to study with him and other faculty members at NIU, broadening and further diversifying the program.”

Michael Bump, Professor and Director of Percussion Studies at Truman State University, first encountered Teague nearly 30 years ago when Bump, then a graduate student at the University of Illinois saw him perform on a tenor pan for U of I students and faculty. “None present had ever witnessed such flights of virtuosity on pan, the demonstration leaving an indelible awareness that a defining artistic experience had just taken place,” Bump said. “In the years since, Liam and I have had several opportunities to professionally interact, including on four different occasions when he has been my invited guest artist clinician at both Ohio State University and Truman State. Throughout this span of time, the young virtuoso of that first encounter has blossomed into an internationally revered performing artist, teacher, and composer. In Liam, the people of Trinidad and Tobago gifted the world a tireless ambassador of the unique musical voice that is pan. How fortunate the NIU community is to have such a dedicated life-long learner. One who embraces the art of the question, patiently and tirelessly sharing the wealth of his knowledge with those around him.”

Avery Attzs came to NIU to follow a similar path to Teague. He studied under him for six years. “As a young boy growing up in Trinidad and Tobago, the name ‘Liam Teague’ was a familiar one,” Attzs said. “Oftentimes it was used as a noun to describe someone who showed exceptional talent or promise when it came to playing the steelpan. Although incredibly humble, Liam Teague is considered a legend and is held in the highest regard by the global steelpan community. He continues to bring great pride to the people of Trinidad and Tobago as he promotes Trinidadian culture to the highest degree. Through his commissioning of new music for the steelpan and his dedication to bringing diverse musicians together, he continues to blaze the trail of excellence as he works to push the steelpan to new heights.”

Teague is the author of a steelpan method for beginners published by the Hal Leonard Corporation, the world’s largest publisher of print music.

He has created arrangements for the most celebrated steelband competition in the world, Panorama, for Nutrien Silver Stars Steel Orchestra, Harvard Harps Steel Orchestra, Starlift Steel orchestra, and Skiffle Steel Orchestra. He has many recordings to his credit, including Hands Like Lightning, For Lack of Better Words, Panoramic: Rhythm Through an Unobstructed View and Open Window.