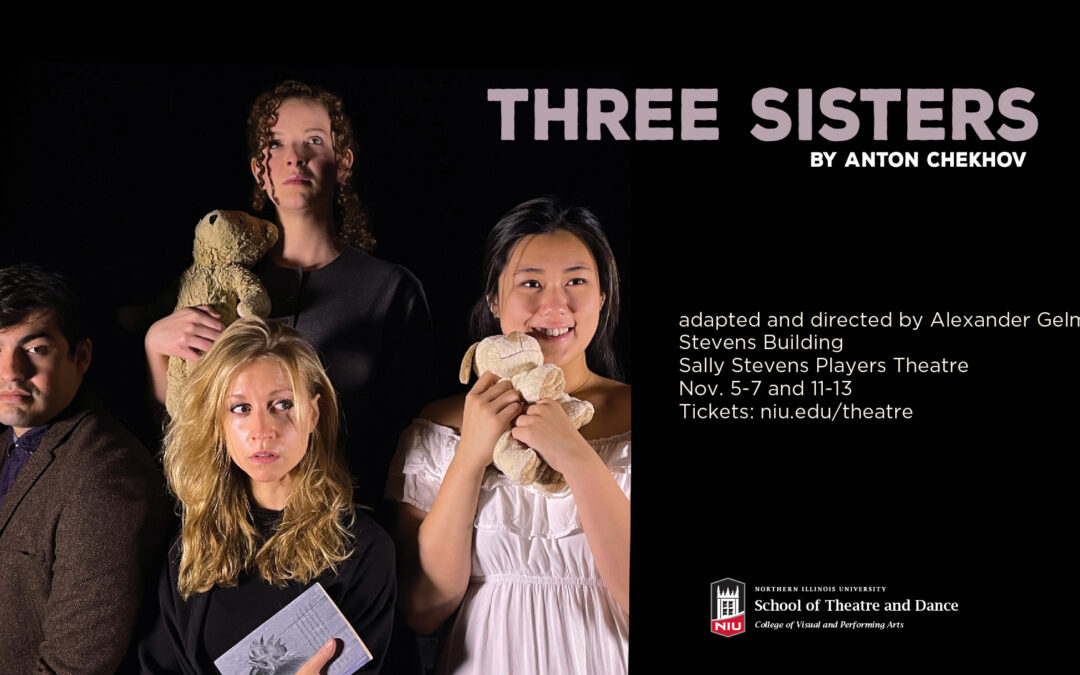 A new adaptation of Anton Chekhov’s classic “Three Sisters” opens Friday, November 5 in the NIU School of Theatre and Dance. This world-premiere of a new adaptation translated and directed by Alexander Gelman, the school’s Distinguished Engagement Professor and Head of MFA acting, and breathes new life into Chekhov’s taut story of a family in the provinces hoping for a better life–always almost “going to Moscow.”

Nicholas Bishop (Rode) is a junior actor at NIU. You may have seen him in past shows such as “Everybody”, “Love and Information”, and “Macbeth.” Hobbies include; guitar, basketball, and skateboarding. He is super EXCITED to be a part of this show.

Kaitlyn Cheng (Irina) is a third year MFA acting candidate who hails from California. Previous NIU credits include: “The Wolves” (#8), “The Resistible Rise of Arturo Ui” (Clark), “Bike America” (Penny). It has been a joy to share this experience with a room full of generous people. It feels good to be back.

Tomás Dakan (Andrei) was born and raised in Pasadena, Calif. and received a B.A. in Theatre from Occidental College. He is thrilled to be back in a physical space to work on “Three Sisters” as his final project role, especially after the room has been so eager and hungry to find the beautiful moments in this play. His previous credits at NIU include Todd in “Bike America”, Felix in “Bird in the Hand”, and Edmund in “Summertime.” He wishes to thank all the NIU faculty and staff that have helped him up to this point and hopes you enjoy the show as much as he has enjoyed working on it.

Zac Harness (Fedotik) is a third year BFA actor who is incredibly happy to have his first in-person appearance on a NIU stage. Previous NIU credits include “The Resistible Rise Of Arturo Ui“ as Gaffles/Fish/Bodyguard and “Town Hall” as B. He is so excited to be in a front of a live audience again and hopes that you enjoy the show!

James Hendley (Kulygin) is a third year MFA Acting student originally from Newnan, Ga. Previous shows at NIU include “Angels in America: Millennium Approaches”, “Love and Information”, and “Summertime.” Regional credits include the Nurse in “Romeo and Juliet” (Great River Shakespeare Festival), Haemon in “Antigone” (Barter Players), and Romeo in “Romeo and Juliet” (North Carolina Stage Company). James is also the proud co-founder and artistic director of Newnan Shakespeare in the Park, which produces free performances of the works of William Shakespeare every summer in Newnan, Ga. Much love to RJA always. Enjoy the show!

Kaz Qutab (Chebutykin) is a third-year Acting MFA candidate from central Massachusetts. “Three Sisters” is his first live production at NIU. He offers his deepest gratitude to the people who made this production, the people who came from many miles away to see it, and his person. Previous credits: Nick in “The Time of Your Life”, Givola in “The Resistible Rise of Arturo Ui”, and Death in “Everybody.”

James Arthel Reilly (Vershinin) is a third year MFA Acting candidate from the great state of Pennsylvania. He has previously appeared at NIU in “Summertime”, “Love and Information” and “Angels in America: Millennium Approaches.” James is a writer, actor, teacher and filmmaker. He is enormously grateful to be back to work and cannot dream of a better group of people with which to take this journey.

Andrea Shapiro (Natasha) hails from Ann Arbor, Mich. She is a fourth year BFA Acting candidate, professional singer, and working on feeling solid enough to put “dancer” in her bio. NIU credits: #14 in ”The Wolves” and Arthur/Momus in Franz Kafka’s “The Castle.” Other credits include: Ariel in “The Little Mermaid” (Stage Coach Players), cast member in “Stockwell” (Intermission: A Virtual Theatre Festival), as well as multiple productions at Chicago’s Second City.

Gavin Struempler (Tuzenbach) is an Alaskan born and raised, fourth-year BFA acting candidate at Northern Illinois University. He was last seen on the live stage as K in “The Castle” and Lysander in Goodly Creatures “Midsummer Night’s Dream.” He has performed with Convergence Theater Collective and is a founding member of NYC’s movement theater group Babel. He’s so incredibly thankful to have you here, and hopes you enjoy the show.

Alexander Gelman (Director/Adapter) is a Russian-born and American-trained director, who received his training at Boston University. Mr. Gelman has worked as a director and translator of plays from Russian to English. His many productions include “Eugene Onegin”, “L’Incoronazione di Poppea”, “Turn of the Screw”, “L’Italiana in Algeri”, “Camelot”, “Twelfth Night”, “Side by Side by Sondheim”, “As You Like It”, “Romeo and Juliet”, “Die Fledermaus”, “The Threepenny Opera”, “The Taming of the Shrew”, “Stage Struck”, “Barber of Seville”, “La Traviata”, “Carmen”, “School for Wives”, “Waiting for Godot”, “A Midsummer Night’s Dream”, “Journey of the Fifth Horse”, “Tartuffe”, “Tango”, “The Lion in Winter”, and “The Burning Fiery Furnace.” He has worked at such theatres as American Repertory Theatre, Arena Stage Company, Canterbury Opera (Christchurch, New Zealand), Chicago Lyric Opera, Utah Opera, Ashlawn-Highland Music Festival, Chattanooga Opera Association, Hartford Stage Company, The Acting Company, New York Shakespeare Festival, Minneapolis Children’s Theatre Company, Emmy Gifford Theatre, and The Juilliard School of Drama.

Professor Gelman served as Director of the School (2001-2021). Prior to joining NIU, he taught at University of Utah and University of Nebraska-Lincoln, where he headed MFA directing programs. Mr. Gelman has also assisted such notable East European directors as Andrei Serban, Yuri Lyubimov, Lucian Pintilie, and Yuri Yeremin.

Shannon Austin-Goodin (Stage Manager) is a third year BFA actor here at NIU and is from Louisville, Kentucky. This is her first time stage-managing at NIU and she is so thankful to have been a part of this show process, and hopes you enjoy the show!

Adam Rager (Technical Director) is a first year Grad Student with a BS in Theatrical Arts from The University of Southern Indiana 08’. Over his 13 year leap between undergrad and Graduate School he works for Regional Theatres across America. He has also worked for National tours of Damn Yankees, Elf The Musical, Paw Patrol Live and Smokey Joe’s Cafe. Adam is excited for his first Technical Director position with NIU SOTD.

Amanda Ranallo (Assistant Stage Manager) is a third year BFA in Acting candidate. She has appeared in Love and Information and Town hall online with NIU. This is her first show stage managing and she hopes you enjoy.