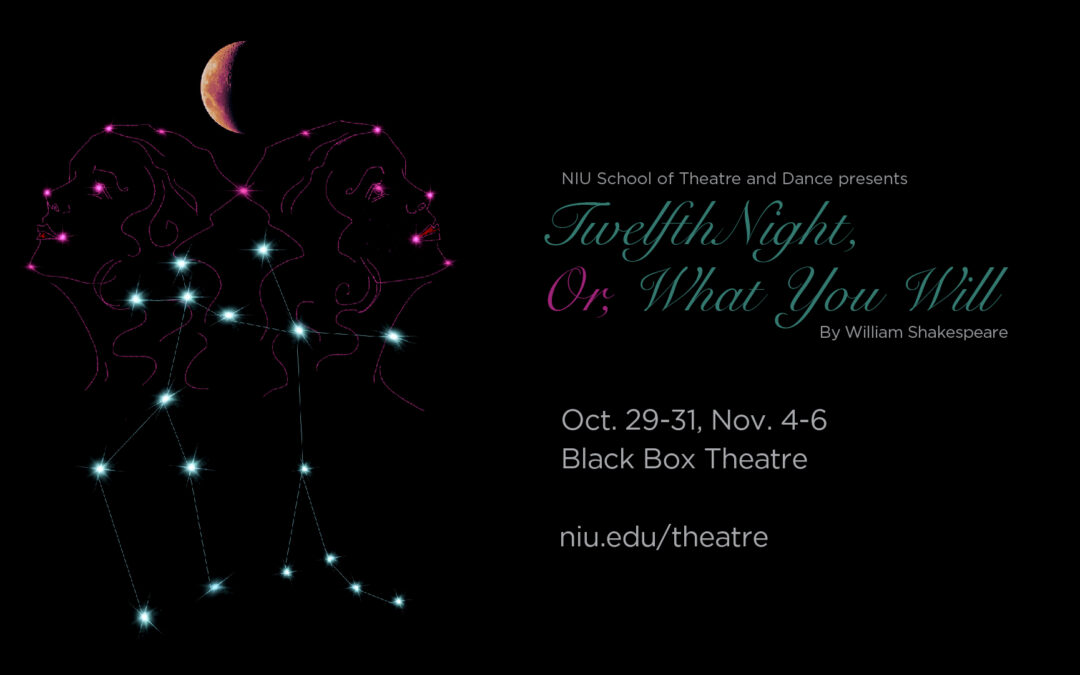 Did you ever have the urge to run away to the circus? The upside-down world of Illyria is a little like a circus. Expect mistaken identity, disguised lovers, comic chases, and fights!

The production is directed by Bethany Mangum-Oles, an actor, director and educator who is a full-time performance area faculty member at NIU.

Tickets can be purchased through the School of Theatre and Dance online box office. Tickets are $17 for adults, $15 for seniors, $9 for non-NIU students and NIU students can attend for free by reserving a ticket in advance.

Jonathan Samuel Allsop (Sir Toby) is a third year MFA Acting candidate at Northern Illinois University. Jonathan received his BA in Music from the University of Pennsylvania before moving to Chicago. Some of his credits include: Peter Quince in A Midsummer Night’s Dream (Notre Dame Shakespeare Festival), Desmond in Concrete Jungle (Goodly Frame Theatre), and Leroy in A Bright New Boise (Northern Illinois University). Jonathan has also released his debut album, Lavender Therapy, which is available on all streaming platforms. To learn more about Jonathan and his work visit Jonathanallsop.com

Sophia Arnold (Orsino) is a fourth-year BFA Acting student at Northern Illinois University in DeKalb, Ill. She has worked with Kane Repertory Theatre (Romeo and Juliet), understudied with Indianapolis Shakespeare Company (Hamlet), and interned with Oak Park Festival Theatre. Favorite roles at NIU include Beauty (Everybody), O’Casey (The Resistible Rise of Arturo Ui), Kitty (The Time of Your Life), and Helen (Troilus and Cressida).

Sylvie Mae Baldwin (Feste) is an actress, musician, and third year MFA acting candidate. Sylvie has worked regionally at South Coast Rep, Antaeus Theatre Company, Seattle Public Theater, Book It Rep, Lexington Children’s Theatre, and many others. On screen, Sylvie has had the pleasure of working with Adam Arkin, James Choi, and Mikhail Saburov. From 2014-2016 Sylvie toured skinny crazy small – an autobiographical play about her recovery from anorexia nervosa. Sylvie is a proud member of Actors’ Equity Association and represented by 10 Talent Agency in Chicago. This one’s for dad!

Alfonso Tucker Jr. (Fabian) is a fourth year BFA actor, and he is very proud to be back on stage, playing the role of Fabian. Alfonso has learned so much in the past three years, doing theatre during a pandemic has made him a stronger actor. He is and always will be pushing to be the best actor he can be.

Ashley-Marie Chávez (Maria) is a fourth year BFA Acting candidate, this is her final show at NIU. It has been such a beautiful and thrilling time growing as an artist with this production. Some of her credits include, Frieda in The Castle, DockDaisy in The Resistible Rise of Arturo Ui, and A in Town Hall. As always para Maria y Walter gracias por todo.

Clark Cheatham (Malvolio) is a senior BFA Acting Candidate from St. Charles, Ill. His credits at NIU include, Nick in The Walk Across America for Mother Earth directed by Frankie DiCiaccio, Dudley R. Bostwick in The Time of Your Life directed by Matt O’Brien, Jim Crocket in The Resistible Rise of Arturo Ui directed by Alex Gelman, and Cousin in Everybody directed by Edwin Lee Gibson. Other favorite credits include Algernon in The Importance of Being Earnest, Marius in Les Miserables, and Adam Beltran in a Chicago based web series The Eventide Effect. Clark is appreciative of the hard work the cast/crew has done and is looking forward to sharing his first Shakespeare show with everyone.

Jack Goings (Sebastian) is a senior BFA acting candidate and this is his fifth and final show at NIU. He has appeared in previous productions such as Martin in Angels in America, Rainbow Carl in Walk Across America for Mother Earth, and Alex in A Bright New Boise. He has also appeared in shows at the Chippewa Valley Theatre Guild in Wisconsin as Macbeth in Macbeth, Lysander in A Midsummer Night’s Dream, and Richard III in Richard III. He is excited to be back in person for this performance to share the hard work of everyone involved with an in-person audience again.

Lulu Grey (Valentine/Servant/Officer 2/Priest) is a senior Theatre Studies major. This is her fifth show at NIU. Previous credits include Bakkhai in Bakkhai, Jenny/Violet/March Hare in Wonderfully Alice, Nick’s Mom/Daisy in The Time of Your Life, and Mona (Then) in Stage Coach Players’ production of Come Back to the 5 & Dime, Jimmy Dean, Jimmy Dean. She is thrilled to be participating in this production, and welcomes you to Illyria!

Wesley Hutchinson (Curio/Officer 1/Feste Understudy) is a third year BFA in acting candidate from Michigan and a student at NIU. This is his third role at NIU, he has been in Love and Information and Everybody.

Matthew Judd (Antonio / Sea Captain) is a junior BFA Acting candidate in his second show at Northern Illinois University. He has acted at Moraine Valley Community College, Oak Lawn Park District, Alsip Park District and Alan B. Shepard High School. Judd was seen in NIU’s production of Love and Information directed by Frankie DiCiaccio. He is super excited to be part of this amazing show and excited to say he has been in a show by Shakespeare. Judd is really thankful for the experience and is happy to be part of this process of art with everyone to create such a fun and crazy world together.

Logan Rasmussen (Olivia) is a fourth year BFA candidate, and this will be her final show at NIU. Some of her previous credits include Mariain Twelfth Night (Hawai’i Shakespeare Festival), Annabel in (NIU) Bike America, and Cast in Love and Information (NIU). Logan is grateful for the opportunity and can’t wait to share Illyria with you!

Makenzie Weatherford (Viola) is a third-year MFA acting candidate. At NIU, she recently performed as Love in Everybody, Susan in A Bird in the Hand, and Maria in a reading of Summertime. With two B.A.’s in English and theatre, her favorite performances include Antigone as Antigone, Beatrice in The Servant of Two Masters, Mrs. Hardcastle in She Stoops to Conquer, and–her favorite–Ten Days in a Madhouse as Nellie Bly.

Bethany Mangum-Oles (Director) is an actor, director, educator, and mama of two born and raised in southern California. Marking her eighth directed production with NIU, she is thrilled to be returning to the mainstage this season with her direction of Twelfth Night…or What You Will. Bethany holds a BFA in acting from California State University, Fullerton, and an MFA in acting from NIU where her studies have taken her to the Moscow Art Theater School in Moscow, Russia and the Adana International Theatre Festival in Adana, Turkey. Since gaining her MFA, she has found her artistic home here at NIU as full-time Performance Area Faculty. She also serves as Rotating Voice and Movement Faculty at the Gately-Poole Studio.

Jessica Ferreira (Assistant Stage Manager) is a junior BFA design and technology student with an emphasis in Stage Management. Twelfth Night is Jessie’s second show at Northern Illinois University as assistant stage manager. Her previous role includes NIU’s Everybody. Jessie also worked on Time of Your Life which was sadly cancelled due to covid. This is Jessie’s first mainstage show and she is so excited to be a part of it.

Luke Harmon (Stage Manager) is ecstatic to be back in the booth at NIU. A recent graduate, he received his bachelor’s in Theatre Design and Technology in the spring of 2021. Stage management credits include Romeo and Juliet (Kane Repertory Theatre) Bike America, Dancing Forward Together, The Time of Your Life, Troilus and Cressida, Le Corsaire (NIU), Noises Off!, Little Women the Musical (Stage Coach Players). Luke has previously worked as an Assistant Stage Manager for the Elgin Visual and Performing Arts Center and as a Technical Coordinator for the Children’s Community Theater of DeKalb. When outside of the theater, Luke works in supply management for a large manufacturing company.

Rachel Seabaugh (Scenic Design) is a third year MFA candidate in Scenic Design here at NIU. She graduated in 2019 with her BA in Theatre from Truman State University. Previous designs here at NIU include Fall Dance Showcase in 2019, and Angels in America just last year. She is also the Assistant Props Manager at NIU, and plans on pursuing jobs in both props and scenic design after graduating in the spring. She is forever grateful to her friends and family for their love and support, and is dedicating this show to her mom, Loretta.

Sarah Slagle (Costume Designer) is thrilled to return to NIU as a guest designer. She has previously designed The Time of Your Life (cancelled due to COVID-19), Walk Across America for Mother Earth, and Boy at NIU. Other favorites include Macbeth (Shakespeare at the Castle) and Bent (MUSE Theatre Collective) and wardrobe supervising at the Utah Shakespeare Festival this summer. Sarah holds an MFA in Costume Design from NIU, a BA from the University of Mount Union and has studied at the Moscow Art Theatre in Moscow, Russia. Thank you for supporting the return of live theatre live theatre!

Emily Vitrano (Intimacy Choreographer) is an actor, educator, and writer making her creative home in Chicago. She holds a BFA in Acting from the University of North Carolina at Greensboro and an MFA in Acting from Northern Illinois University. She is a certified yoga instructor at the 200-hour level and is currently pursuing her MA in Women’s Studies and Gender Studies from Loyola University in Chicago, where she hopes to bring greater awareness, conversation, and scholarship to the untold stories of women to shape global conversation. As an intimacy choreographer, Emily utilizes foundational techniques as taught by Theatrical Intimacy Education. She is passionate about creating consent-based spaces and empowering artists to “establish boundaries to serve boundless creativity.” You can learn more about Emily’s career and writing at www.emilyvitrano.com and www.allthatileftunsaid.com.

Ben Werner (Sound Designer) is a senior BFA design and technology candidate, focusing on sound and lighting. Twelfth Night is Ben’s fourth show here at Northern Illinois University. His previous NIU credits include sound designer for Angels in America, assistant sound designer for Fall Dance 2019, and for The Time of Your Life. Ben has also worked with Northern Sky Theater in Door County, WI for the past three years where he has held the position of Audio Technician and was given the opportunity to design six shows.

The NIU School of Theatre and Dance follows the COVID-19 safety protocols of the university. The guidelines are updated as conditions change. At this time, face coverings are required in all indoor university spaces including our theatres. Updated information is available at: niu.edu/protecting-the-pack