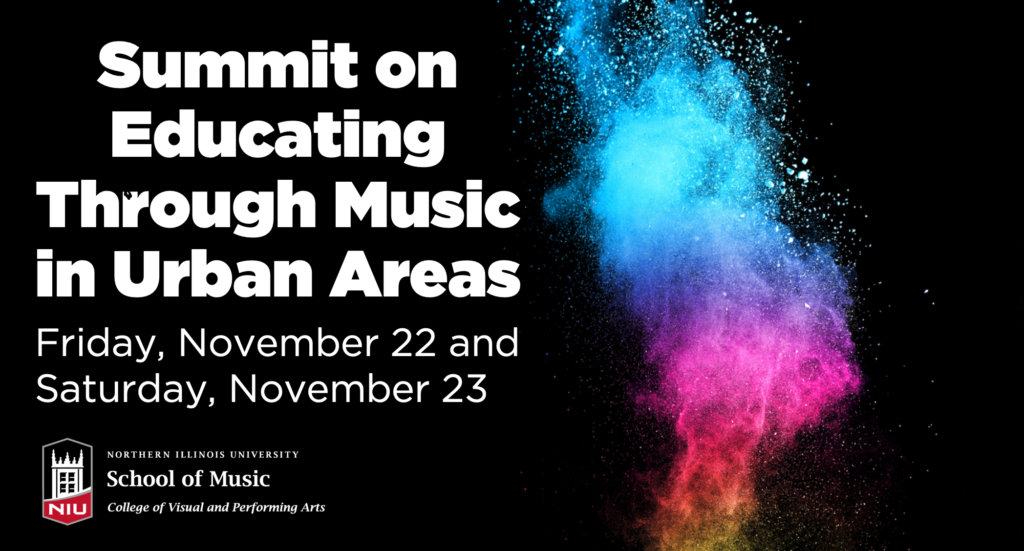 The NIU School of Music’s Music Education program will host the two-day event, “Summit on Educating Through Music in Urban Areas,” Friday, November 22 and Saturday, November 23.

All sessions will be held in Music Building room 171. There is no registration required. Anyone is welcome to attend.

This two-part presentation will begin by taking a look Roosevelt Griffin’s career and how he uses purpose and personal experiences to drive instruction and student success. During the second part of the presentation, he will share the approaches and techniques he uses to introduce young students to jazz improvisation.

Dr. Roosevelt Griffin III is an award-winning educator with international acclaim for excellence in music education. He is the President and CEO of the Griffin Institute of Performing Arts NFP. He is also the director of bands for Harvey School District 152, youth ensemble director for the Chicago Jazz Philharmonic and has recently joined the Vandercook College of Music’s One City Program.

Some of his most notable performances as an educator include performances at the Chicago Jazz Festival, Chicago Blues Festival, Buddy Guy’s Legends, Midwest International Band and Orchestra Clinics, Jazz Education Network’s International Conference, Auditorium Theater, ASCD International Conference, and the Chicago Jazz Showcase. Before becoming a full-time educator, Dr. Griffin worked with some of the world’s greatest musicians, including Luciano Pavarotti, Diana Ross, and Jimmy Heath. His approach to teaching has been highlighted in the ASCD training video by Eric Jenson, “Teaching With Poverty In Mind”.

He and his students have also been featured in Downbeat and JazzEd magazines for obtaining an endorsement with Jody Jazz Mouthpieces. He recently co-authored the latest addition to GIA Publication’s TMTP series, “Teaching Music Through Performance: Beginning Jazz Ensembles” and the soon to be release Meredith Music Publication, “Rehearsing the Jazz Band”. Dr. Griffin’s work has brought him several prestigious honors. Most recently, the Illinois State Board of Education acknowledged him with the 2020 “Those Who Excel Meritorious Service Award”. He was also recently awarded with the 2019 “Dream Maker” Award from the Bronzeville Children’s Museum and the 2019 Chicago Defender’s “Men of Excellence Award”.

Scott McConnell will be speaking about the role that Non for Profits play in music education in Chicago, focusing on the role CYSO is playing in communities throughout the city. Looking at his personal experiences in different classrooms he will explore some of the experiences he’s had and material covered with his students over the years.

Scott has achieved both undergraduate and masters degrees in percussion and steel pan performance from Northern Illinois University, along with a performers certificate in Steelpan Studies and a masters in recording media technology.

Connecting with the Children of Chicago, Christopher Cvengros
Saturday, November 23, 9 a.m.
Everyone has an opinion about the Chicago Public Schools (CPS). This session will explore one music teacher’s more than a decade’s worth of experiences of teaching at a neighborhood CPS school in North Lawndale on the west side of Chicago. The session will delve into steps to prepare for a successful career teaching in an urban setting. It will consider some unique aspects of teaching in Chicago and explore some inroads to connecting with all students – regardless of backgrounds.

Christopher Cvengros has devoted the past 16 years of his life to teaching music. He studied music education at Northern Illinois University (NIU) where he earned his Bachelor of Music Education in 2003. He started his career teaching general music and extra-curricular choir at St. Joseph Catholic School in Marion, Iowa. After teaching for four years, he returned to NIU and earned a Master’s Degree in Choral Conducting. In 2009, he became the music specialist at the James W. Johnson School of Excellence – a neighborhood public school in Chicago. In addition to teaching Pre-K through 8th grade general music during the school day, Mr. Cvengros runs seasonal after school band and choir ensembles, and he produces an annual Jr. Broadway musical with selected 3rd – 8th grade students.

Cvengros serves as the Johnson School of Excellence arts integration coordinator and has been a mentor teacher to music specialists preparing to teach in the Chicago Public Schools. In 2015, he was recognized for excellence in teaching as a Madeline Maraldi Fellow, and he has been listed as teacher of the month multiple times. He has directed vocal ensembles that have performed at venues including the Iowa State Capitol, Chicago’s Navy Pier, and WCIU-TV. He has had the pleasure of directing two ensembles that traveled to Washington D.C. and performed at the White House in 2016 and the Kennedy Center in 2018 at the biannual Turnaround Arts Talent Show. During his more than a decade of teaching in Chicago Public Schools, he has shown his commitment to improving the music education of the children of Chicago where he resides with his wife and two young daughters.

Improvisation within an Educational Setting, Christopher McBride
Saturday, December 23, 10:30 a.m.
Using creativity to give your students the best education through limited means.

His group Christopher McBride & The Whole Proof has played some great Jazz venues around the Midwest such as Andy’s Jazz Club & The Green Mill in Chicago and Jazz at the Bistro in St. Louis. Since moving to New York in 2013 The Whole Proof has performed in venues around New York including Smalls Jazz Club, SMOKE Jazz Club, Fat Cat, Ginny’s Supper Club & Minton’s Playhouse in Harlem. Christopher continually writes new music for the band and is releasing his second project in 2020. Currently, Christopher is touring with JazzReach and also works with multiple divisions of Jazz at Lincoln Center and the Louis Armstrong House.

Learn the important steps necessary to transition from student teaching to full time music education. Hear multi-faceted commentary on the interview and hiring process, success as a 1st year teacher and how to create lasting teacher/student relationships. Participate in an interactive question and answer session with cool prizes!

Raven Talley
Mrs. Talley has worked as an educator for 12 years within Chicago Public Schools. She holds multiple degrees in journalism, media arts, and educational administration. She has worked within the district as an intermediate and primary teacher, CPS Framework Specialist, coach to new teachers, district workshop presenter and assistant principal. She is very fortunate to have received great leadership training and brings a wealth of experience as it relates to small group instruction, progress monitoring and assessment.

Raven is a wife and mother of 2 sons and 1 daughter. Her children attend CPS schools. She enjoys shopping, crafting, reading and family time. Her favorite television shows include – House Hunters and Diners, Drive-Ins and Dives. She is an active member of Alpha Kappa Alpha Sorority, Inc. – Xi Nu Omega chapter.

Rashad Talley
Rashad Talley is an extraordinary educator with nearly 20 years experience on the elementary, middle, and high school levels. He has been recognized by organizations and universities for outstanding alumni, as well as educator of the year, continuing to improve teacher development and impact student outcomes in the city of Chicago.

Mr. Talley strongly believes that educators have the power to help every child, at every grade level, regardless of their developmental stage. He promotes the development of strong trusting relationships with families, as well as encouraging teachers to continue their learning and development. Under his leadership, schools have revamped academic and extracurricular offerings, as well as created new ways of thinking and learning with media integrated curriculum, and setting high expectations for student engagement and discourse.

Rashad is currently pursuing his doctorate in educational leadership and school superintendency. He is also a member of the Apostolic Faith Church music ministry, and Kappa Alpha Psi Fraternity, Inc.

Mary Lynn Doherty, Ph.D., is associate professor and coordinator of music education in the Northern Illinois University School of Music.  She is a children’s music specialist and has taught in Iowa, Wisconsin, and Illinois at the K-12 and university levels. She received her Master of Music degree and her Ph.D. in Curriculum and Instruction in Music Education degree from the University of Wisconsin-Madison and her Bachelor of Arts degree from Luther College (Iowa).

Most recently, Doherty held the post of Director of Music Education and Associate Conductor of the Chicago Choir Academy, a Charter School in Chicago founded by the Chicago Children’s Choir. During her time with the Academy, she prepared 120 young singers to perform with the Chicago Symphony in a production of Benjamin Britten’s Noah’s Flood. In addition, her fourth grade choir performed the opera Stone Soup, by Chicago composer Philip Seward. At the request of Lyric Opera of Chicago, the choir was recorded.

Doherty’s research is on vocal health issues experienced by music teachers and she has presented her work both nationally and internationally. In 2008, she started the Community School of the Arts Children’s Choir at NIU. The choir performs three times a year on campus, and they were invited to participate in a Choral Exchange during the 2011 Chicago Youth in Music Festival, with members of the Chicago Children’s Choir and the Children’s Choir of Morelia, Mexico. In addition to the choir, Doherty leads a summer choral camp each year.

Christine D’Alexander, D.M.A. is assistant professor in the Northern Illinois University School of Music.  She holds degrees in viola performance from Arizona State University (BM) and music education from the University of Southern California (MM, DMA).

Professor D’Alexander has been an active music educator both in California and Illinois, where she has established multiple orchestral programs for youth, and has taught strings, general music and theory classes. She has adjudicated district and state-level music competitions and festivals, and worked with various community music and outreach programs throughout the country. Her research focuses on children’s participation in community youth orchestras and the integration of music programs within underserved neighborhoods. Her work has been presented in multiple platforms throughout North America, South America, Europe, and Asia, and recently published in Revista Internacional de Educación Musical and ISME Community Music Activity Conference Proceedings.