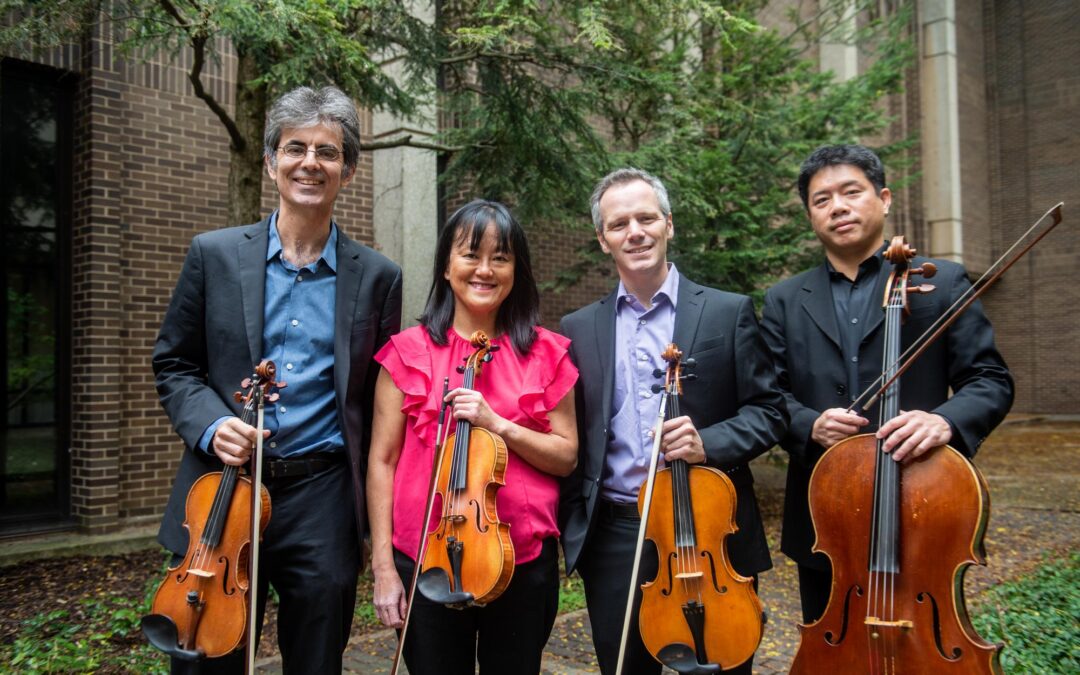 Garrop’s piece, “For Such a Time as This” is based on the Book of Esther. While the text is religious in nature, the composition is meant to be universal and written from a different perspective on the story, giving a strong voice to the female character.

“For Such a Time as This” features libretto by Jerre Dye with mezzo-soprano/narrator Julia Bentley. Dye is a Chicago-based playwright, opera librettist, director and actor. Bentley is associate professor of voice at the Jacobs School of Music in Bloomington, Indiana.

The piece was Commissioned by SDG Music Foundation through the Richard G. Gieser Commission Endowment.

My early experiences with the Book of Esther stem from my childhood, when I would take part in Purim celebrations at my local synagogue. The children would dress up in costume and bring our toy ratchets and rattles. The rabbi would chant the text of the book in Hebrew, shouting out “Haman!” whenever the name came up, at which point all of us children would scream and drown out Haman’s name with our noisemakers. Afterward, we would eat hamantaschen (a three-cornered pastry filled with sweets). Clearly, we enjoyed the holiday as a fun spectacle; I doubt I ever wondered about the deeper significance of the story.

Upon revisiting the story as an adult, I find several striking points. First, women had little or no agency over their lives – Biblical times were a man’s world (Oueen Vashti’s banishment at the beginning of the Book sets this tone immediately). Second, there is no mention of God, meaning that Esther and Mordecai are the agents of change in the story rather than God, though an argument can be made that God had an indirect role in guiding Mordecai’s and Esther’s actions.

Finally, the significance of Esther taking direct action to save the descendants of the House of David can’t be overstated, as God had made an eternal covenant with David to preserve his descendants forever, as well as giving David’s lineage the throne of Israel. Esther not only saved David’s lineage from obliteration, but also preserved God’s promise with the Jewish people.

The question of whether Esther possesses the agency to act is addressed head-on in the biblical story, when Mordecai asks her, “Who knows if you were chosen for such a time as this?” Esther’s weighing of this question is the central dilemma of the story. To add gravitas to this moment, this is the only point that I ask the narrator to sing as Esther ponders the question. Moreover, I find Mordecai’s question can be as applicable to us today as it was to Esther. If Mordecai were to ask each of us if we were chosen for such a time as this, perhaps we might view his query as an invitation to remember that we each possess agency to make changes happen in our lives, to act upon injustices that we see happening around us, and to strive to leave the world a better place than how we found it.

For Such a Time as This was commissioned by SDG Music Foundation, Chicago, IL. Librettist Jerre Dye penned a new narration so that the story is told through Esther’s eyes.

Mezzo-soprano Julia Bentley followed apprenticeships with the Santa Fe Opera and the Chicago Lyric Opera with appearances in leading operatic roles including Carmen, Rosina, Dorabella, Despina, and both Rossini and Massenet Cinderellas, from Anchorage to New York. Recognized by the New York Times for her “rich sound, deep expressivity and uncanny sense of pitch,” she was a featured soloist with orchestras led by George Manahan, Raymond Leppard, Oliver Knussen, Robert Shaw and Pierre Boulez.

Recent engagements have included performances of La Damnation de Faust with the Eastern Connecticut Symphony Orchestra, Pierrot Lunaire with eighth blackbird, La Cenerentola with Sacramento Opera, Berg’s Lyric Suite with the Emerson String Quartet, and the Bach B Minor Mass with the Apollo Chorus as well as chamber music series in Chicago, Philadelphia, New York and the National Holocaust Museum in Washington, D.C. She serves as an Associate Professor of Voice at the Jacobs School of Music in Bloomington, Indiana.

He is the recipient of the Bryan Family Foundation Award for Drama from the Fellowship of Southern Writers. His plays include Distance, Cicada, Threads, Short/Stories, The New Adventures of Hansel and Gretel, Wild Swans, Sid and the Magic Box and an adaptation of Stravinsky’s A Soldier’s Tale with IRIS Orchestra.

His opera librettos include: Ghosts of Crosstown of Opera Memphis (featured at the OPERA America’s annual conference as part of the new works sampler in 2014 and 2015); The Parksville Murders, a filmed, episodic, virtual reality opera for Opera on Tap in New York City; The Falling and Rising for the U.S. Army band and chorus; Chautauqua Stories for Chautauqua Opera, By/In for Opera Memphis; Taking Up Serpents for Washington National Opera; and upcoming commissions for both Opera Philadelphia and the Napa Valley Arts festival.

Dr. Garrop has received numerous awards and grants including an Arts and Letters Award in Music from the American Academy of Arts and Letters, Fromm Music Foundation Grant, Barlow Prize, and three Barlow Endowment commissions, along with prizes from competitions sponsored by the Detroit Symphony Orchestra, Civic Orchestra of Chicago, Omaha Symphony, New England Philharmonic, Boston Choral Ensemble, Utah Arts Festival, and Pittsburgh New Music Ensemble. Notable commissions include The Battle for the Ballot for the Cabrillo Festival Orchestra, Goddess Triptych for the St. Louis Symphony Orchestra, The Transformation of Jane Doe for Chicago Opera Theater, In a House Besieged for The Crossing, Give Me Hunger for Chanticleer, Glorious Mahalia for the Kronos Quartet, Rites for the Afterlife for the Akropolis and Calefax Reed Quintets, and My Dearest Ruth for voice and piano with text by the husband of the late Justice Ruth Bader Ginsburg. Theodore Presser Company publishes her works. Her music is frequently recorded by Cedille Records, with works commercially available on several additional labels. In 2022, Dr. Garrop is serving as the featured composer of the Bowling Green State University New Music Festival and the Indiana State University Contemporary Music Festival, as well as a mentor composer for the Cabrillo Conductors/Composers

Workshop, LunART Festival Composers Hub, and Chicago a cappella’s HerVoice Emerging Women Choral Composers Competition. She was the inaugural Emerging Opera Composer for Chicago Opera Theater’s Vanguard Program (2018-2020), and served as Composer-in-Residence with the Champaign-Urbana Symphony Orchestra, funded by New Music USA and the League of American Orchestras (2016-2019). Dr. Garrop taught composition and orchestration full time at a university for sixteen years (2000-2016) before launching her freelance career. For more information, please visit her website at www.garrop.com.