School of Theatre and Dance presents “The Conference of the Birds” April 1-3, 7-9 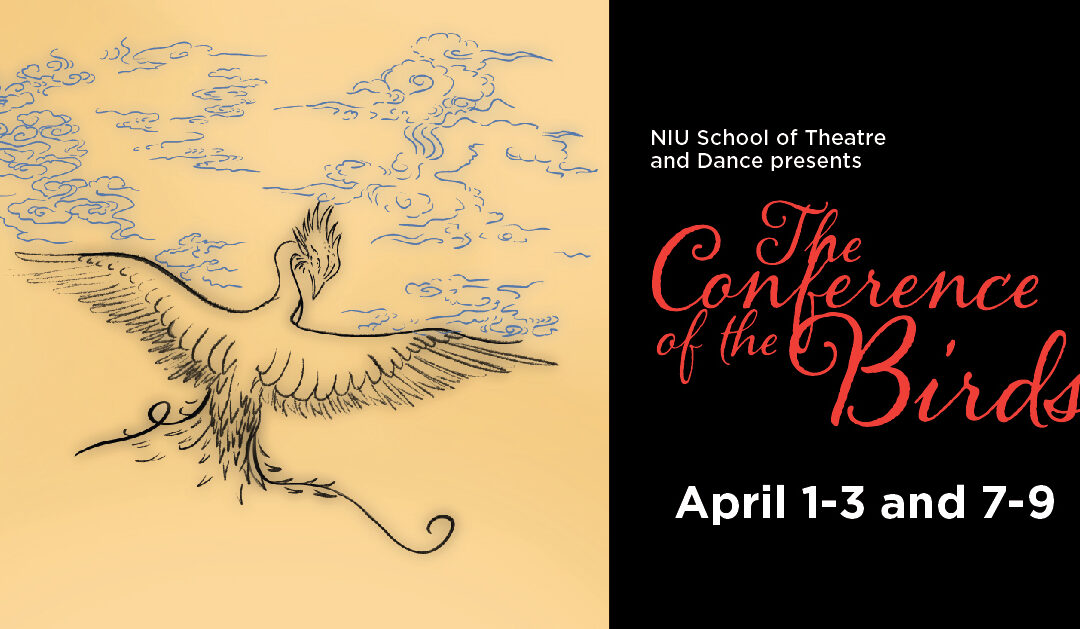 The Conference of the Birds, a play based on a twelfth century Suffi poem that follows a group of birds on a spiritual quest for enlightenment, is presented by the NIU School of Theatre and Dance April 1-3 and 7-9 in the Black Box Theatre of the Stevens Building. This lyrical adventure fantasy play unfolds through figurative language, movement, and dance.

Wesley Hutchinson (Attar) is a junior BFA Acting candidate and this is his fourth show at Northern Illinois University. He has acted in “Love and Information,” “Everybody,” “Summer Nights,” and “Twelfth Night” here at NIU. Mr. Hutchinson is very honored to be in such a connected piece this semester and to share it all with you.

Kristen Serbia (Hoopo) is a sophomore BFA Acting candidate and is so very glad to be making her debut at Northern Illinois University’s School of Theatre and Dance. Her previous credits include Brenda in a staged reading of “La Ruta” by Isaac Gomez, Grusha in “The Caucasian Chalk Circle” by Bertolt Brecht, and an ensemble member in Anna in the “Tropics” by Nilo Cruz. She is honored to be creating art on the stage and growing as an artist during such dark and uncertain times. She would also like to dedicate this performance to her family and friends. Jeremiah 29:11

Matthew Judd (Osprey) is a junior BFA Acting candidate in his third show at Northern Illinois University’s School of Theatre and Dance. He has acted at Moraine Valley Community College, Oak Lawn Park District, Alsip Park District and Alan B. Shepard High School. Judd was seen in NIU’s productions of “Love and Information” directed by Frankie DiCiaccio, and “Twelfth Night, Or, What You Will” directed by Bethany Mangum.
He is very excited to be part of this very eye opening and journey of s elf-production. Judd is excited to show a different style of his acting and is thankful for everyone he got to work with on this beautiful piece of theatre.

Jack Gordon (Golden Pheasant) is a second-year BFA Acting candidate who is thrilled to be in his first live show at NIU. Before becoming a Huskie, Jack did shows in high school and community theaters in Utah; one of his favorite shows being SCERA Theater’s “Elf the Musical” (multiple roles). Prior to choosing acting, Jack competed as a gymnast for over a decade. Jack wants to thank his incredible family, friends, professors, cast, crew, and the creative team for supporting his journey of “being the bird.”

Seamus Fleischman (Duck) a third-year BFA Acting candidate, is feeling funky and fresh for this fabulously eclectic show. He could previously be seen last year in NIU’s productions of “Love and Information” and “Town Hall,” and this past fall in movement extravaganza “Edward the Second.” He hopes this mystical show is your idea of a hooting time.

Jonathan Perkins (Eagle) is a sophomore BFA in Acting candidate and is ecstatic to make his NIU debut with this wonderful show! He is also a voice actor, recently being heard in Congo Square Theatre’s new audio series, “The Clinic as Shad,” directed by Daniel Bryant. He was also a performance committee intern for Congo Square. Jonathan is so honored to have been graced by his lovely cast’s artistry and hopes that the push-ups from every rehearsal have made them all extremely muscular. Much love to everyone involved and, of course, the countless hours of birdwatching.

Emma Vaughn (Mockingbird) is a sophomore BFA Actor, and this is her first show at NIU. Previously she has worked on shows like “Fuddy Meers” as Gertie and “Angels in America” as Ethel Rosenberg in theatres in her home state of Texas. She also has performed in musicals and has a robust background in music, including studying at NIU as a vocal music minor. Emma is excited to begin her NIU career with this show!

Abigail Lamoreaux (Goldfinch) is a sophomore pursuing a BFA in Acting. This is her first production onstage at NIU, previously having run wardrobe for NIU’s “Edward II,” and first live production since 2019. Past credits include “Mary Poppins,” “On the Verge,” “Silent Sky,” “A Christmas Carol,” and “In Transit.” “Thank you to Cecilie for pushing me into leadership roles I otherwise wouldn’t have taken. I deeply appreciate your faith in me!”

Finn Stumpf (Owl) is a junior BA Theatre Studies student and digital artist from Ottawa, Ill. This is their first time acting in a show here at NIU. Previously at NIU, they were the assistant director of “Edward II,” and recent acting credits include: Slank in “Peter and the Starcatcher” and Philostrate in “A Midsummer Night’s Dream.” Finn hopes that you find this show a “hooting time.”

Lulu Grey (Parrot) is a senior BA Theatre Studies candidate. Previous roles include Valentine in NIU SoTD’s “Twelfth Night,” Mona (Then) in Stage Coach Players’ “Come Back to the Five & Dime, Jimmy Dean, Jimmy Dean,” and Bakkhai in “Bakkhai.” She is thrilled to welcome you to her sixth and final show at NIU, and she hopes you will enjoy!

Jacob Ihm (Loon) is a second-year transfer student. Going for a second degree as a theatre studies major. Currently working on writing a play for their capstone project. Jacob would like to thank his family and friends for helping him through the dark times and celebrating the good times.

Morgan Mallory (Heron) is a third year BA Theatre Studies student and she is very excited to be a part of this production of “The Conference of the Birds.” Some other things she has been a part of are Northern Illinois University’s productions of “Edward ll” and “Everybody,” as well as Crete Monee High School’s production of “Mamma Mia.” She hopes that you all will enjoy the show.

Kay Martinovich (The Herald) is a professional theater director based in Chicago, where she has directed for Remy Bumppo Theatre, City Lit, Trap Door Theatre, and Irish Repertory of Chicago, among others. She is associate professor, head of performance and head of BFA acting in the NIU School of Theatre and Dance. Kay teaches Meisner-based acting, audition technique, professional development for the actor, and introduction to performance. Other classes she has taught are directing I and II (devising), Irish drama, and aesthetics of performance. She is a proud member of Stage Directors and Choreographers Society (SDC), the professional union for directors.

Cecile Keenan (Director) is a freelance director, producer and writer, active in the Chicago Theater Community for over 20 years. She works with many theaters to assist with their creative and administrative practices and is dedicated to emerging artists. Cecilie assisted Cerqua Rivera Dance Theater on a full dance program on immigration titled “American Catracho.”

She was the co-writer with Nicholas Patricca for a new play with jazz about Langston Hughes entitled, “Chasing the Wind.” Other recent work includes co-writing and directing “My Dream Act,” a solo show with a young woman who is undocumented. Keenan has directed on many stages including The Goodman Theater, Collaboraction, American Blues, Artistic Home, ACT and Teatro Vista where she served as Producing Director for nine years. She also served as artistic director at Bailiwick Repertory where she started the Director’s Festival, 11 Minutes Max and directed many award winning productions. Cecilie held the position of producing director at Chicago’s Apple Tree Theater and before that, associate artistic director at Northlight Theater. Cecilie has received many awards for directing and ensemble work, as well as a TCG Observership to Mexico and several NEA and Foundation Grants and Individual Artist Grants from DCASE to develop or produce new plays, playwriting festivals or collaborate with theaters internationally. She has taught theater and theater creation in Chicago, Minneapolis and Oaxaca, Mexico.

Danielle Reinhardt (Costume Designer) is a second-year MFA in costume design candidate from Sycamore, Ill. This past fall she designed the costumes for NIU’s production of “Edward II.” Prior to coming to NIU, she created the costumes for Stage Coach Players’ performance of “The Little Mermaid” (Egyptian Theatre) as well as the independent film “The White Horse is Dead.” Danielle has also earned her MBA at Elmhurst University and is a senior brand manager for Ultra PRO Entertainment. Her motto is to never stop learning and never stop dreaming.

Ben Werner (Sound Designer) is a fourth year BFA design and technology candidate, focusing on sound and lighting. “The Conference of the Birds” is Ben’s fifth show here at NIU. His previous NIU credits include sound design for “Twelfth Night, Or What You Will” and “Angels in America,” assistant sound designer for Fall Dance Concert 2019, and assistant sound designer for “The Time of Your Life.” Ben has also worked with Northern Sky Theater in Door County, Wisc. for the past three years where he has held the position of audio technician and was given the opportunity to design
six shows.

Anyah Randolph (Assistant Director) is an actress and makeup artist from Joliet, Ill. Currently a BA student at NIU, Anyah has received many awards and an associate degree from Lincoln College. She has worked in many areas of the theatre including onstage with acting, scenery design, lighting, dramaturgy and directing for both Lincoln College and NIU school productions. She wishes to pursue acting after her education will officially finish her studies in May 2022.

Luke Harmon (Stage Manager) is ecstatic to be back in the booth at NIU. A recent graduate, he received his Bachelor’s Degree in Theatre Design and Technology in the spring of 2021. Stage management credits include “Romeo and Juliet” (Kane Repertory Theatre), “Bike America,” “The Time of Your Life,” “Troilus and Cressida,” “Le Corsaire” (NIU), “Noises Off!,” “Little Women the Musical” (Stage Coach Players). Luke has previously worked as an assistant stage manager for the Elgin Visual and Performing Arts Center and as a technical coordinator for the Children’s Community Theater of DeKalb. When outside of the theater, Luke works as a supply chain coordinator for a large manufacturer.