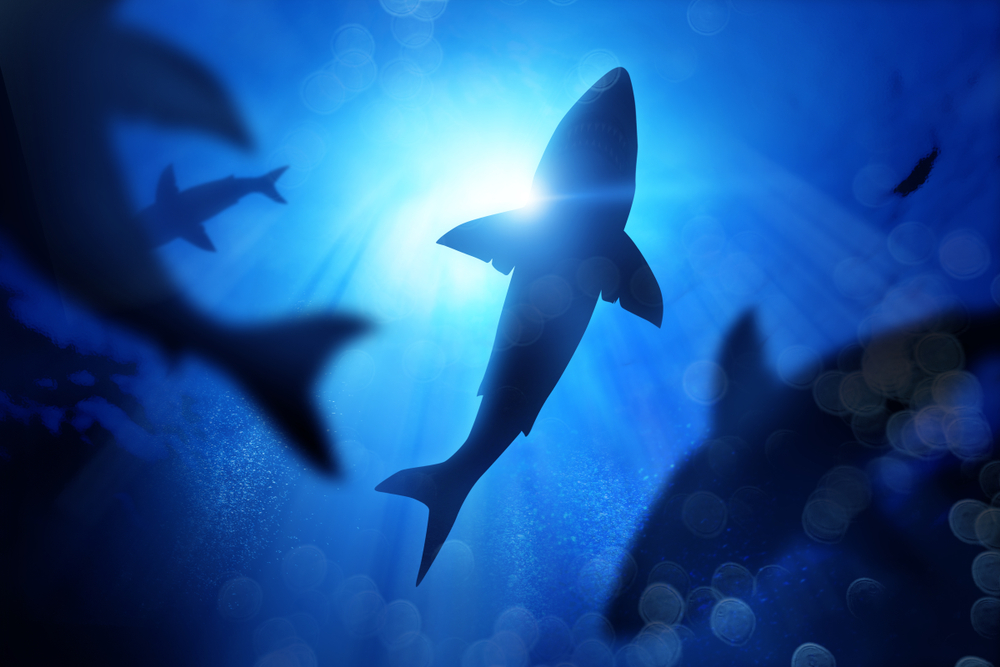 What happens when you let Huskies into the shark tank? We found out in March, when Lindsey Valiulis Fleischhauer, ’04, and her father Stan Valiulis, ’84, presented their Totes Babies product to ABC’s critically acclaimed and multi-Emmy® Award-winning entrepreneurial-themed reality show “Shark Tank.” 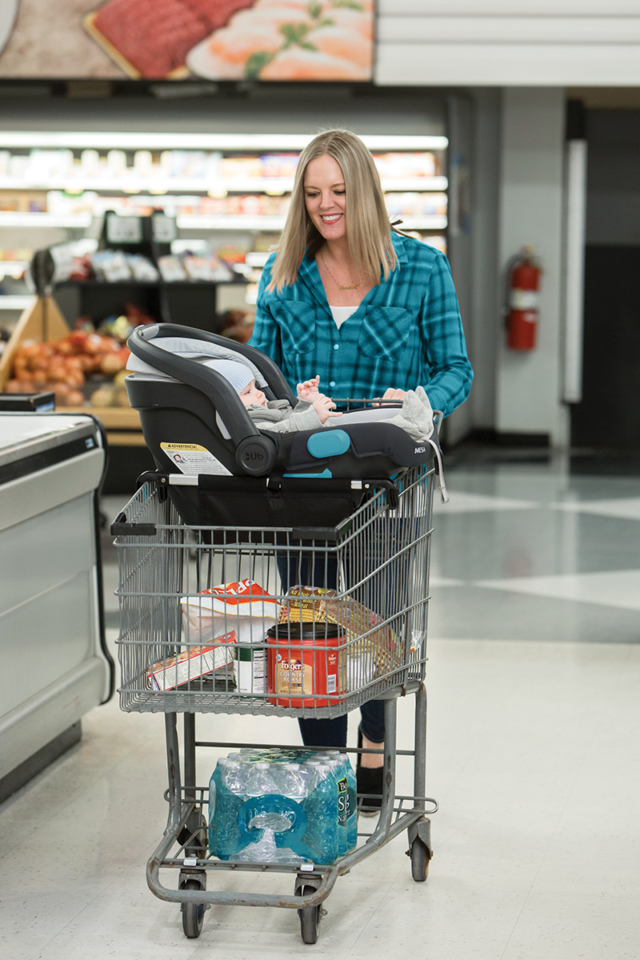 The father-daughter duo came up with a safe shopping cart baby carrier that allows parents to tote their babies while still having room for groceries in the cart. Lindsey realized there was a need for this kind of space-saving product when she was a new mom.

“When I had my first son, I dreaded going shopping with him because I could never get everything I needed, due to the car seat taking up the whole shopping cart,” she said. “If I tried taking him out of the car seat, he would scream and cry, so I knew there had to be a better way! I then went straight to my dad, who holds over 40 patents in the retail fixture trade, and we drew up some ideas and made our first prototype.”

The duo then applied to be a part of the reality show, hoping one of the show’s famous investors would see unique promise in their product and sink funds and resources into Totes Babies. Their hard work and preparation paid off when three Shark Tank investors made offers and the father-daughter duo ultimately sealed a deal with Lori Greiner, the famous “Queen of QVC,” for and investment of $100,000 and a 25% stake in their company.

“It’s been a lot of fun. We give each other ideas all the time, and Lindsey keeps me on task,” Stan said with a laugh. “(The Shark Tank experience) was challenging. We spent a lot of time preparing and getting our information together.”

Stan and his wife Carrie, who graduated from NIU in sociology in 1979, raised Lindsey and her brother and sister in Rockford, Ill. Lindsey grew up watching her father work on his inventions for his fixture and retail display company—Southern Imperial Inc. When he left the organization in 2015, the family-owned manufacturer and distributor to the retail store fixture and display markets was worth $86 million with 460 global employees and facilities in China, Georgia and Illinois.

“Post-retirement” and always up for a new adventure, Totes Babies is just one of the four organizations Stan currently owns.“My dad influenced me a lot as he has always believed in all of his kids and taught us an amazing work ethic,” Lindsey said. “He taught us that we can do anything we put our minds to and showed us that with his careers. I have really welcomed this kind of problem-solving and always wanted to be an entrepreneur because I enjoy thinking of new ideas that can help others.”

This innovative spirit runs in the family.

“I enjoy solving problems and consider them more like puzzles,” Stan said. “It is very rewarding to see my daughter involved and learning how to be an entrepreneur. And it is fun seeing how our product has really helped parents shopping with their babies.”

While Lindsey and Stanley both enjoy the challenge of finding solutions for problems, they have more in common. They both graduated with bachelor’s degrees from the College of Visual and Performing Arts, with Stan, who studied piano, receiving a B.A. in music in 1984. In college and after, he was involved in jazz and rock bands to make extra money and later owned a recording studio. Lindsey was interested in acting, singing and dancing before college, as well as varsity poms and synchronized swimming, before earning her B.A. in theater arts in 2004. 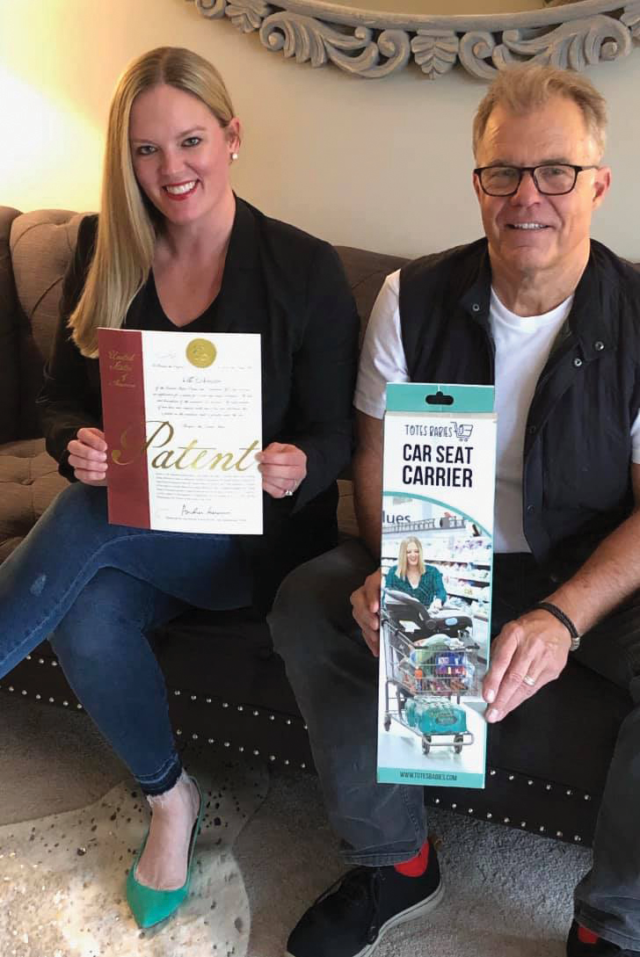 Lindsey and her dad, Stan, with the patent and the product.

“I chose NIU because I knew that the theatre department was great, and I loved that both of my parents were NIU alumni,” Lindsey said. “I was a theatre major and that helped me in so many ways in every aspect of my careers.”

After graduating, Lindsey went into sales with her brother’s online furniture business and then started working in different departments of her dad’s retail store fixture company, which offered plenty of sales experience. She has also had a health and wellness network marketing business with Arbonne International for over 15 years.

Lindsey and her husband Mark, who received his master’s from NIU, have two young sons. A diehard Huskie, she believes her experiences at NIU paved the way for her successes so far.

“NIU was so much fun, and I had great teachers and made friends that have lasted a lifetime,” she said. “I learned so much that has helped me with our business and life in general.”

Dad agrees. Stan believes the education he received at NIU was a big part of his many ventures and accomplishments over his career.

“I had great teachers and a great learning environment in the music department. It was very creative and cutting-edge, with modern and electronic music,” he said. “The caliber of musicians studying there was world-class. I would say it impacted my creativity in areas beyond music.”

Clearly, the pair have no shortage of inspiration. Even with all the work they put into the reality show pitch, the team sees the whole experience as enormously positive.

“It’s honestly been a dream come true to be able to be co-founders with and work with my dad!” Lindsey said. “My dad has been a huge role model to me my whole life, and I’ve learned so much working with him.”

This article appeared in the Winter 2022 edition of Northern Now.