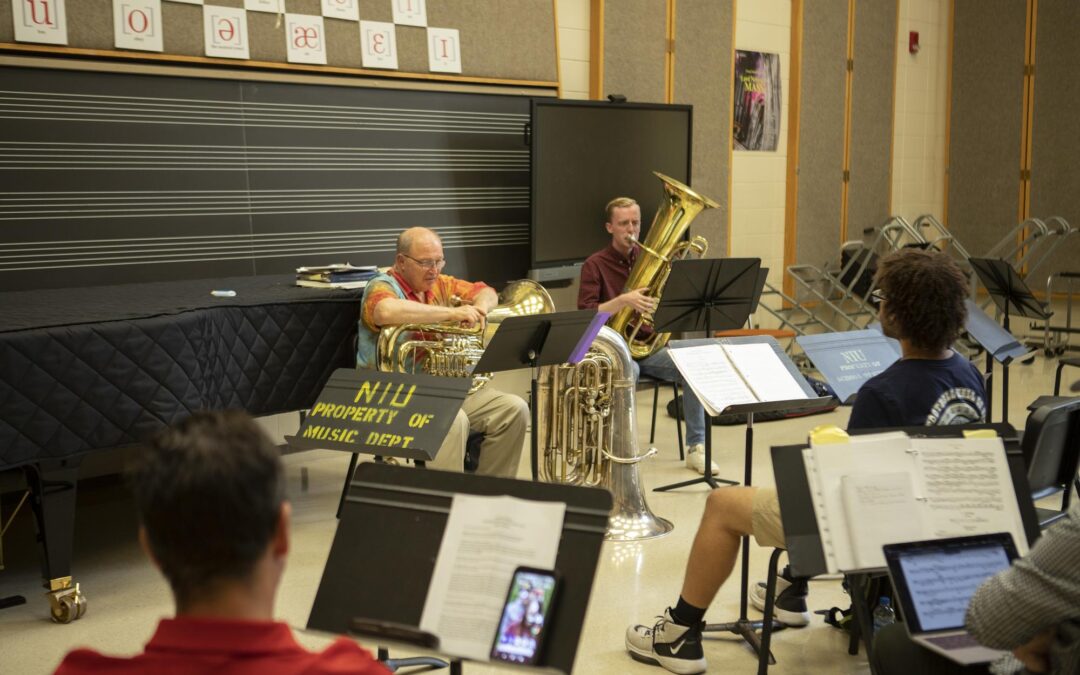 For four days late in July, the NIU Music Building was full of the sounds of some of the best tuba and trombone players from around the country sharing tips, learning new things and enjoying being able to play in person with others for the first time in a while.

NIU was the site of the Pokorny Low Brass Seminar, a regular event brought to DeKalb by Andrew Glendening, the director of the NIU School of Music who hosted similar seminars when he was in charge of the music program at the University of Redlands in California.

The first such seminar at NIU was scheduled to happen in 2020, but was postponed a year due to the COVID-19 pandemic. More than 100 artists from around the country attended the four day seminar, including professional symphony musicians, freelancers, college teachers, graduate and undergraduate music majors, advanced high school students and dedicated amateurs. 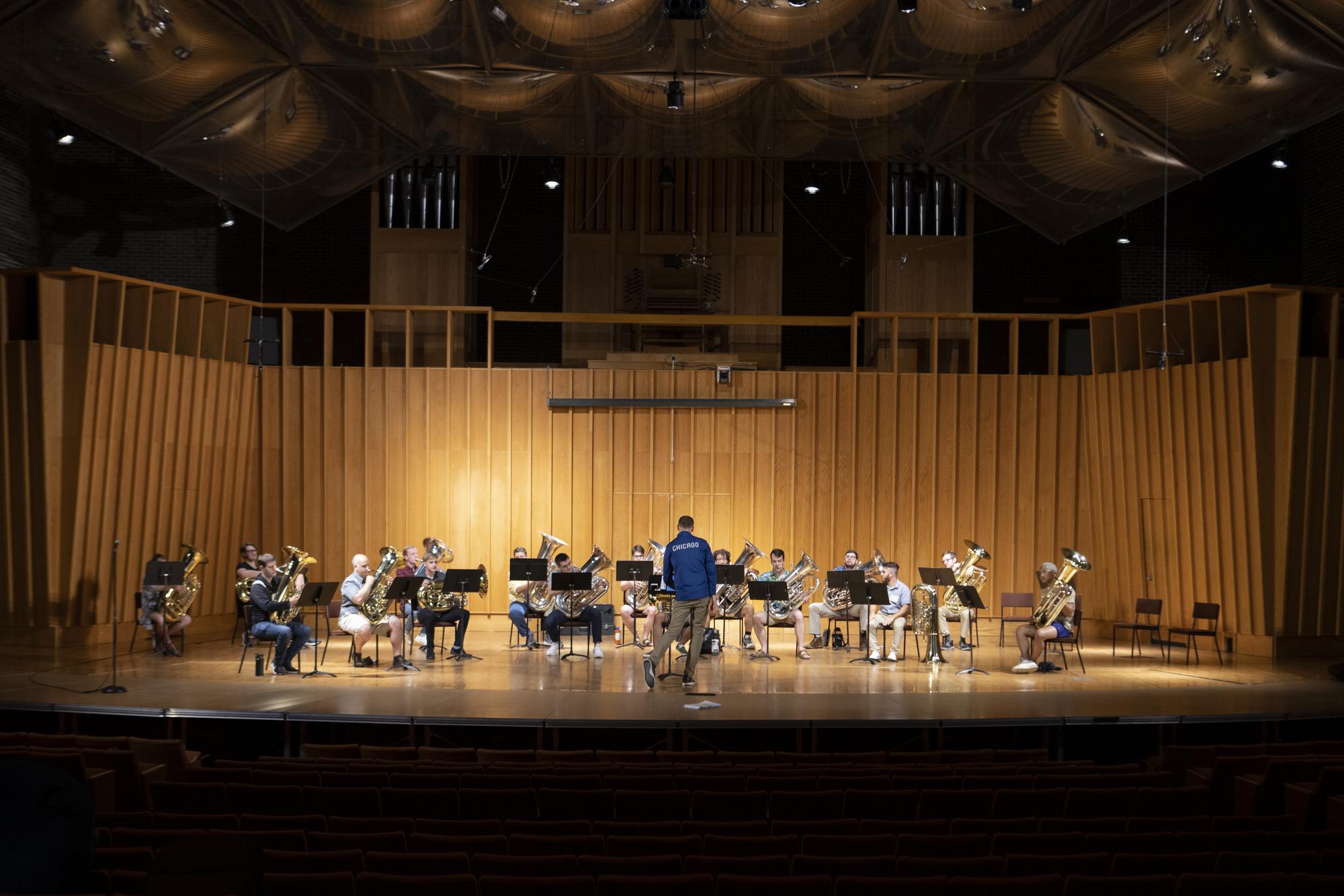 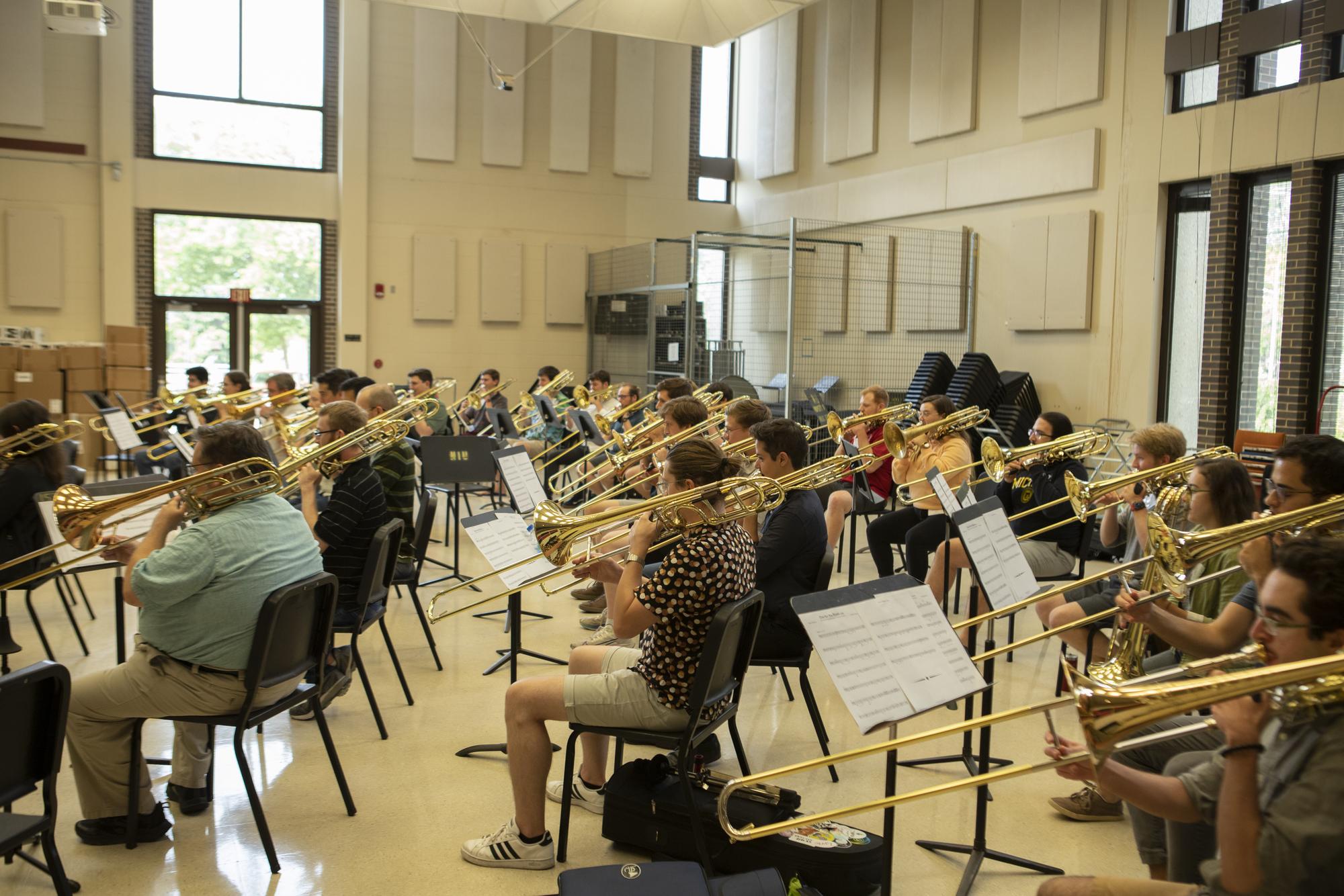 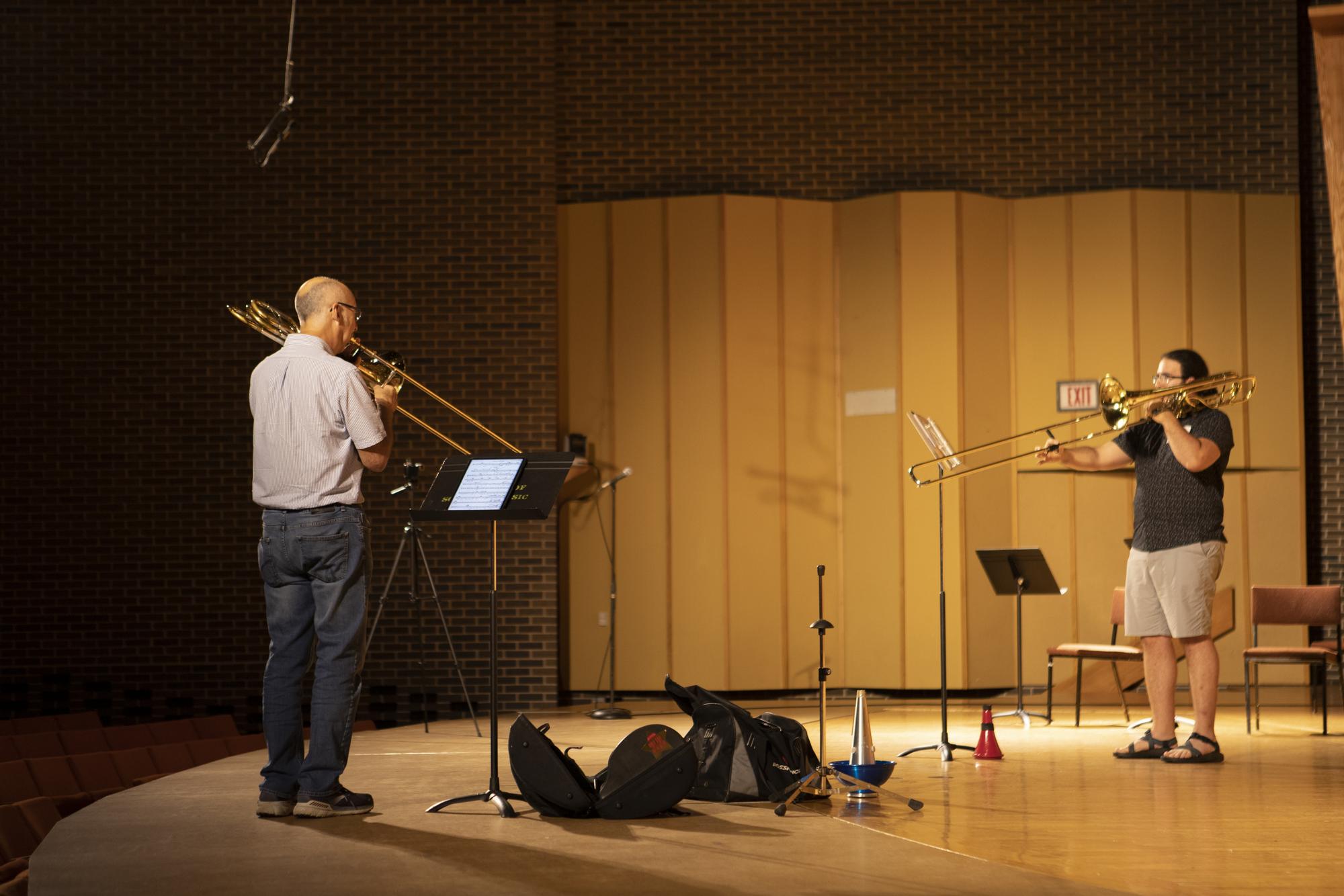 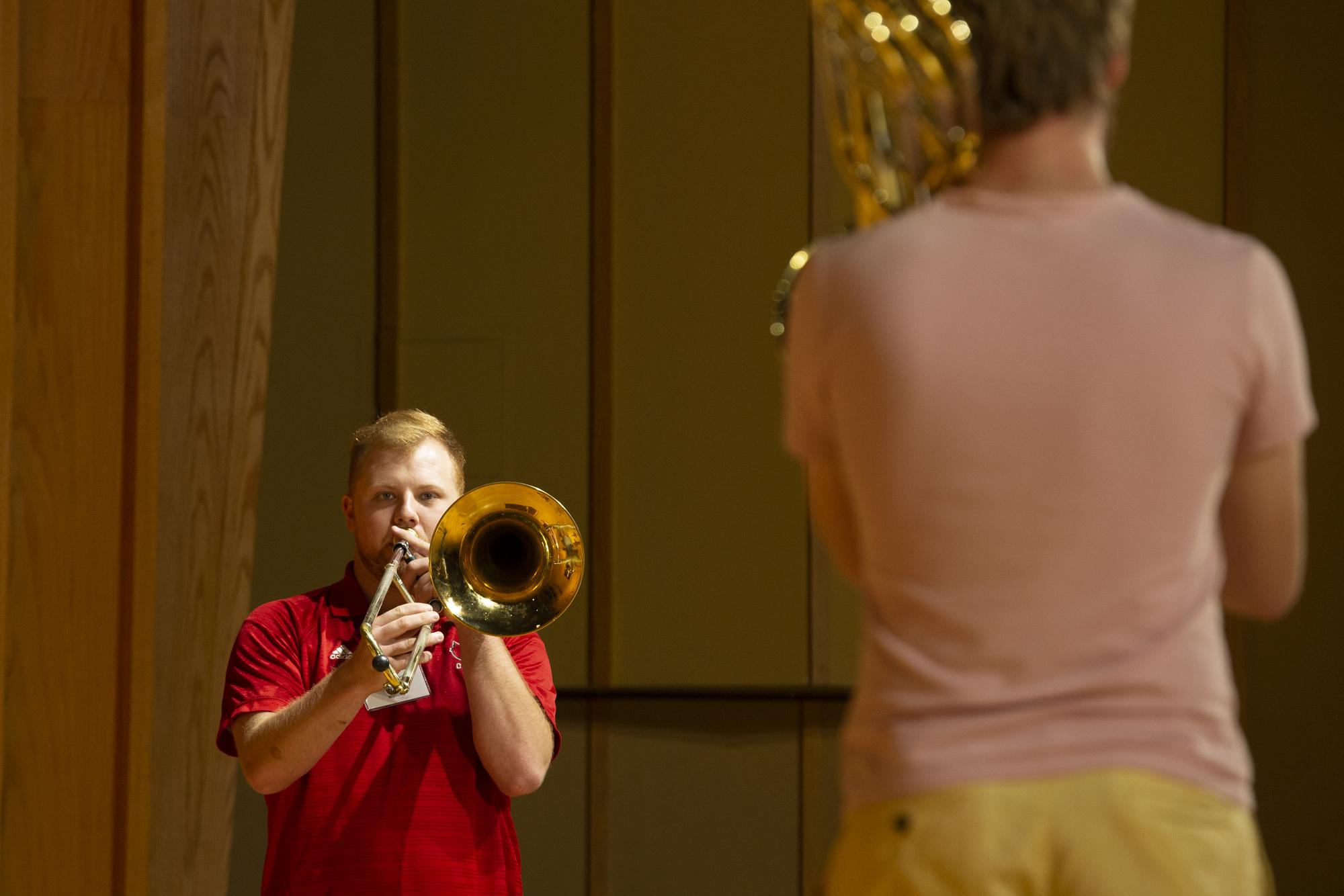 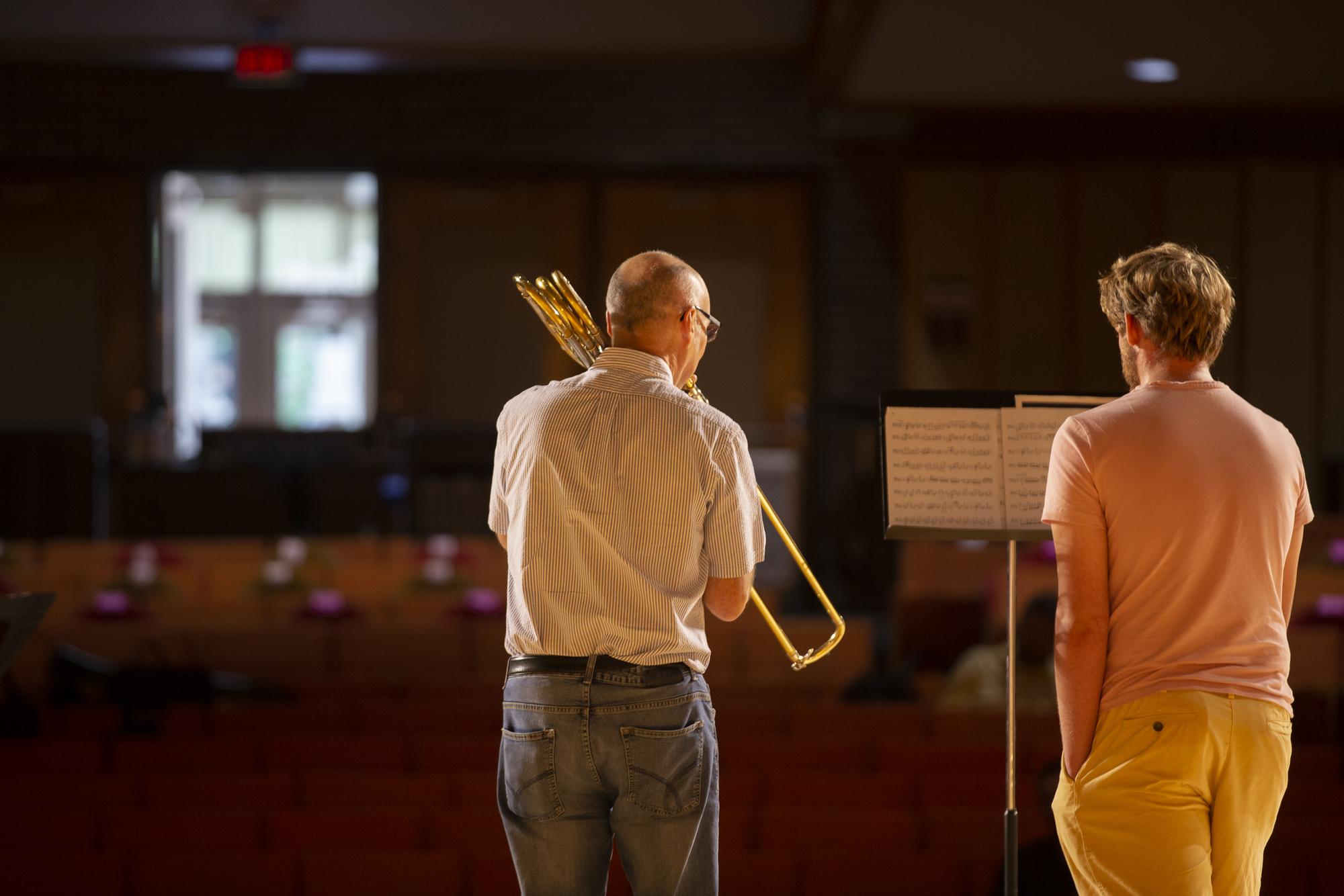 “It’s really interesting the way this has evolved,” said Glendening. “Gene has had an incredible career–among a lot other things, he played on the Jurassic Park soundtrack–and we brought him to Redlands to give an honorary doctorate, and we talked about doing a seminar. He wanted to do something different, and it started with just tubas. We had between 20 and 30 for the first one, and it has expanded every year. Bringing it to NIU was a benefit because being in the middle of the country it’s more affordable for students to travel to, and even with the cancellation last year, most every student who signed up then was able to come this time.”

Tim Higgins, principal trombone of the San Francisco Symphony Orchestra said he enjoys the opportunity to catch up and play with others in a unique setting. “I’ve been coming to these since 2011, and it’s so much fun to touch base with everyone and meet people from all over the country,” he said. “You rarely get a chance like this. For the students, it’s a huge thing to meet and play and learn from some great people.”

NIU faculty members enjoyed having all that talent come together under their own roof.

“It was my first experience with it, and it really well run,” said Timothy Riordan, instructor of trombone. “It was highly educational for our students with the professionals sharing ideas inside and outside of the seminar. Plus, having 60 trombones playing at the same time was a blast.”

Scott Tegge, instructor of tuba and euphonium said, “Everyone was learning from each other both faculty and students, and it was great for all of us to come together. Many hadn’t played with other people in 16 to 18 months. So it was nice to see people from different parts of the country at different points of their careers coming together to play.”