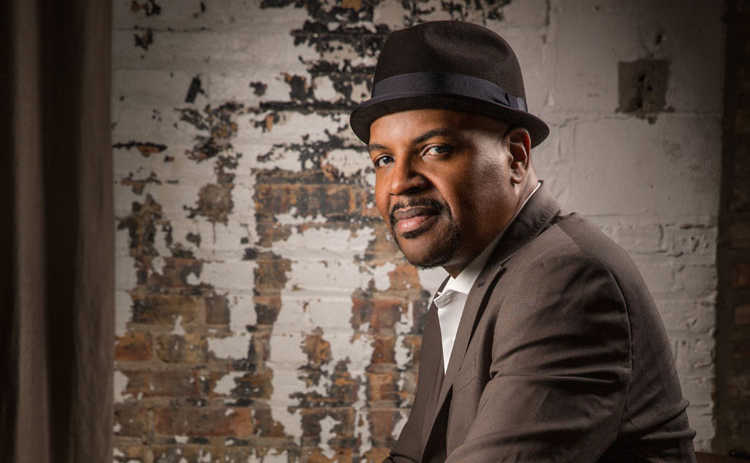 Bobby Broom, assistant professor of jazz guitar and jazz studies in the School of Music was featured, for the second time in five years, in DownBeat magazine’s annual reader’s poll edition. In the December 2020 issue, Broom was chosen as one of the top guitarists in the industry.

The DownBeat readers’ poll is in its 85 year. DownBeat is an American magazine devoted to “jazz, blues and beyond,” the last word indicating its expansion beyond the jazz realm which it covered exclusively in previous years. The publication was established in 1934 in Chicago.

Harlem Born, New York City raised, Bobby Broom has been heralded as “one of the most musical guitarists of our time” by jazz historian and author, Ted Gioia. Playing Carnegie Hall with Sonny Rollins and Donald Byrd at age 16, Broom recorded his debut as a leader, “Clean Sweep,” for GRP Records at age 20. He’s played and /or recorded with Kenny Burrell, Hugh Masakela, Art Blakey’s Jazz Messengers, Stanley Turrentine, Dave Grusin, Charles Earland, Miles Davis, Kenny Garrett and Dr. John, among others. As a leader he has recorded with the Bobby Broom Trio and the disbanded Deep Blue Organ Trio for the Premonition, Delmark and Origin labels. Bobby’s most recent, 2018 recording is “Soul Fingers” (MRI Entertainment/US, Jazzline/EU), which features his newest organ trio, ‘the Bobby Broom Organi-Sation.’ The album explores his reinterpretations of his childhood radio hits and was produced by the legendary drummer/producer, Steve Jordan.

Broom has released 12 recordings in total as a leader. Many have received airplay resulting in national jazz radio chart positions of #1 to #3, resulting in his being recognized as one of the top guitarists by Down Beat magazine’s annual Reader’s Poll in 2015, as well as their Critics Poll for four years, from 2012-2014 and again in 2017.

A dedicated jazz educator throughout his career, Professor Broom holds a Master of Music degree in Jazz Pedagogy from Northwestern University. His teaching experience began under the direction of NEA Jazz Master, Jackie Mclean, at the University of Hartford’s, Hartt school of Music. Prior to his appointment at NIU, he was a jazz faculty member at North Park, DePaul and Roosevelt Universities and the American Conservatory of Music. He continues to conduct clinics, master classes and lectures worldwide and is a teaching artist/instructor and mentor with the Herbie Hancock Institute and the Ravinia Jazz Mentor Program.