All students in the schools that make up the NIU College of Visual and Performing Arts: the School of Art and Design, School of Music and School of Theatre and Dance, are invited to the Fourth Annual Winter Arts Convocation, Monday, January 27 at 5:30 p.m. at Boutell Memorial Concert Hall in the Music Building. 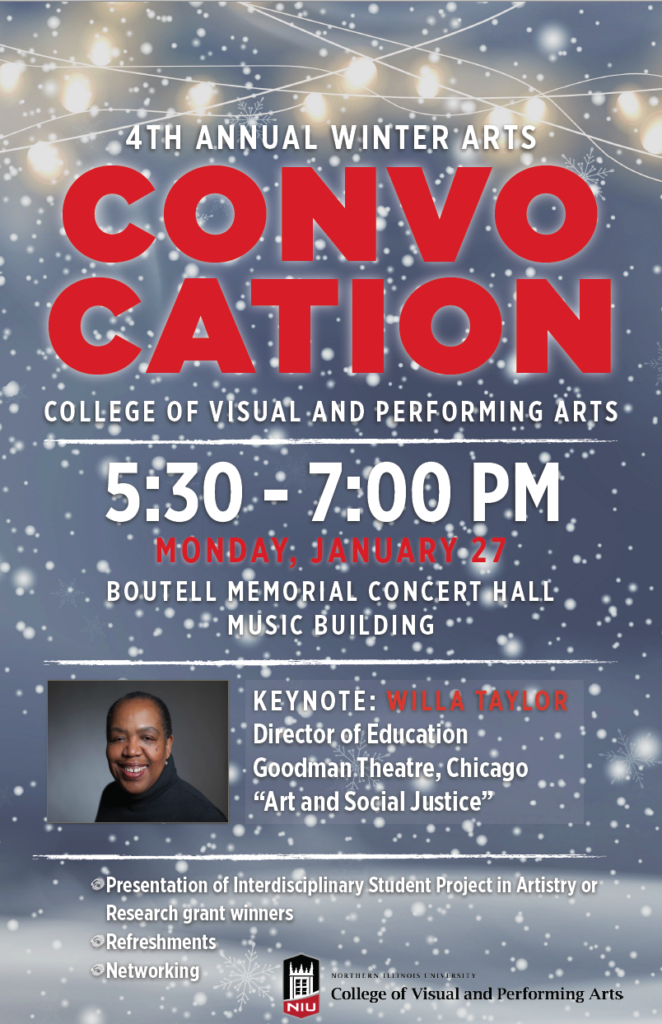 Willa Taylor, director of education at the Goodman Theatre in Chicago will present a keynote address on “Art and Social Justice.”

The event will also feature the presentation of Interdisciplinary Student Project in Artistry or Research grant awards, refreshments and networking.

Willa Taylor is the Goodman’s director of education and community engagement. She began her career in arts education at Arena Stage where, under founding director Zelda Fichandler, she established the Allen Lee Hughes Fellows Program—one of the first theater-run apprenticeships designed to increase participation by people of color in professional theater. She then went to Lincoln Center Theater where she created The Urban Ensemble, a multidisciplinary project that served at-risk youth. This collaboration between Lincoln Center and New York University’s Tisch School of the Arts and The Public Theater was cited by President Clinton’s Council on the Arts and Humanities in its 1996 report, Coming Up Taller.

At Lincoln Center, she consulted for New Victory Theatre, where she designed the arts education program for their inaugural season. Taylor also served as cultural director for Gay Games IV, where she oversaw the production of more than 200 cultural events, including the Broadway production of Sir Ian McKellen’s A Knight Out. In addition to a longtime career in the arts, Taylor brings to the Goodman a wealth of experience in other areas. For 12 years she served as a Russian and Arabic linguist in the U.S. Navy.

While overseas, she oversaw productions for the United Service Organization in Greece and managed Armed Forces Radio and Television in Turkey where she created the Profiles in Black history series. Following her graduation from Kendall College’s culinary program in 2001, Taylor opened Taylor-Made Cuisine, a gourmet catering company as well as Home Café, a neighborhood bistro. In 2005, she helped open and served as the catering chef for Chicago’s EatZi’s Easygoing Gourmet, a chain of gourmet bakeries, take-out markets and restaurants based out of Dallas, Texas.