For many, retirement is the end of one chapter and the beginning of another.  Some people take that concept more literally than others.  Joan Smola, office support specialist in the College of Education, will retire from NIU at the end of June after 15 years.  Her plan for retirement is a little different than most. 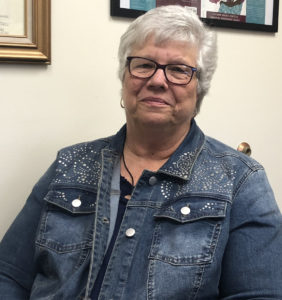 For 14 of those years at NIU she worked in the School of Art and Design in the College of Visual and Performing Arts as a graduate student assistant.

“I really liked working with the grad students,” Smola said. “I’m still friendly with a lot of them on Facebook. I have followed them since they graduated and I’ve seen their families grow. I get invited to come see them in places like Arizona and California.  The students were terrific and so were the faculty.  I’ve really missed them.”

She’ll have more time to travel and to spend with Edward, her husband of 57 years, their five children, 14 grandchildren and five great-grandchildren.  But to her, it feels like she had many more grandchildren.

“I’d help the students register for their classes, and help them take care of all kinds of little things they needed,” she said.  “But a lot of times I was just there when they needed someone to talk to. They might be having a personal problem, or an issue with a class and I’d be there to listen.  I’d be there to let them know that life goes on.  Everyone has ups and downs, and this is only their first round.”

Joan had an interest in art even before coming to NIU.  She enjoys oil painting and while working in the School of Art and Design she developed an interest in various forms of art.  “I know I didn’t really appreciate different kinds of art until I worked here,” Joan said. “Landscapes were always my favorite, but I’d never been exposed to much abstract art. When you first see it, you might think it’s weird, but I really came to like it once I understood where they were coming from and how they did it.”

Out of her growing appreciation for art came her plan for what to do in retirement.

“In the fall of 2020 I’m going to enroll and go for my undergraduate degree in art,” she said.  “Of my 14 grandchildren, seven of them can draw or paint like you wouldn’t believe, but none of them have gone to art school yet.  I’ll set the example.

But she won’t be alone.  Surely, she’ll have another generation of honorary art school grandchildren right alongside her.