Expressions of Defiance art exhibition at NIU in conjunction with Defiant Requiem: Verdi at Terezin

In conjunction with Defiant Requiem: Verdi at Terezín, the Jewish Artists Collective-Chicago (JACC) will exhibit thematically related painting, printmaking, fiber art, sculpture and installation in the Reynolds Whitney Gallery, adjacent to Boutell Memorial Concert Hall in the Music Building at NIU. The exhibit will be on display from the performance date, April 28 through May 15. 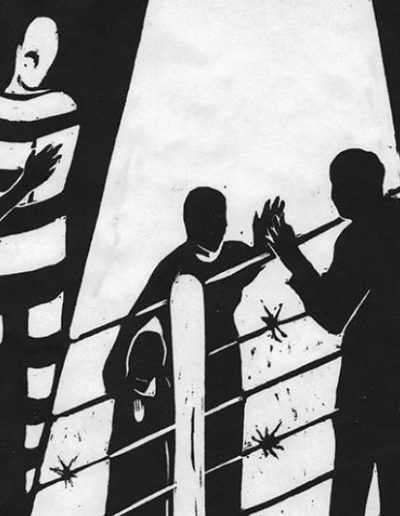 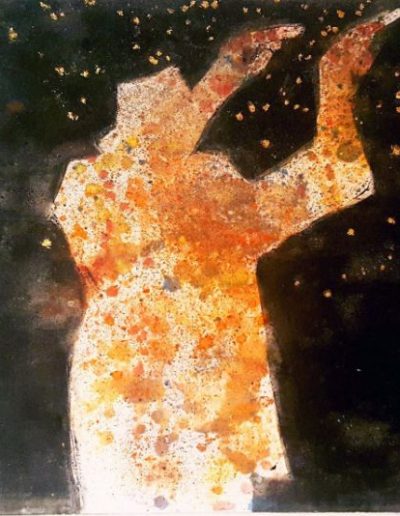 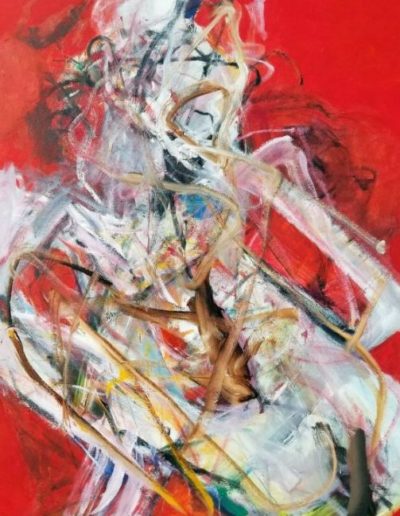 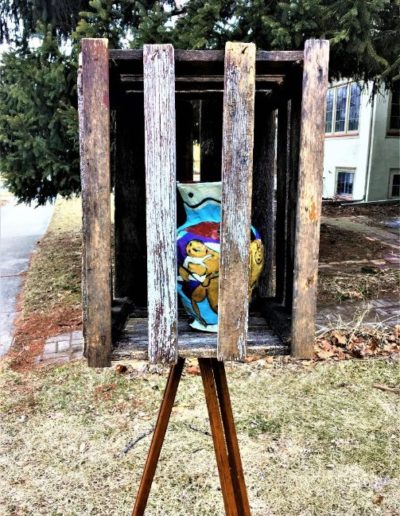 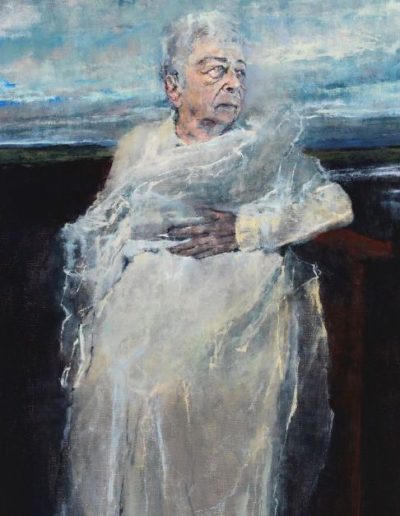 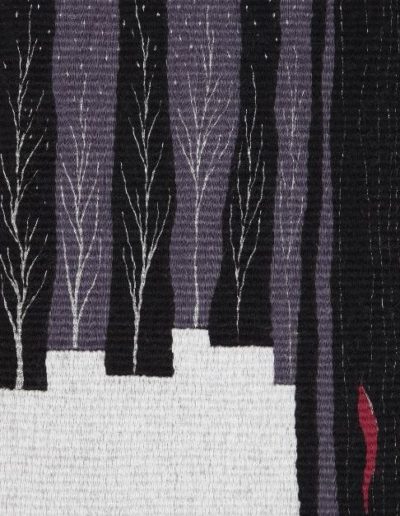 Ten members of the Jewish Artists Collective – Chicago (JAC-C) are participating in the exhibition:

Gabriella Boros has shown her prints, paintings and multimedia works nationally and internationally. Currently focusing on woodblock prints and handmade books, Gabriella also paints in acrylic on wood panel, and creates drawings, sculptures and found-object cheeseboxes.  Born in Israel, Gabriella immigrated to the United States as a child. Her narratives reflect her European parentage, Israeli childhood and American influences. She has a BFA from the University of Michigan School of Art. She currently lives and works in Skokie, Ill.

Susan Dickman is, in addition to making art and writing, a teacher of the blind and visually impaired and founding member of the Jewish Artists Collective-Chicago. She has exhibited work at Woman Made Gallery, Spertus Institute of Jewish Learning, The Evanston Art Center, The Art Center of Highland Park, The Bridgeport Arts Center, and Morpho Gallery. A two-time Illinois Arts Council Award recipient, she has published poetry, fiction, and essays in Intellectual Refuge, Best of the Best American Poetry 2013, Lilith, Zocalo Public Square, Brain, ChildJewish Fiction, and in other publications.

Dorit Jordan Dotan, Israeli-German artist, lives and works in Chicago, Ill. In her work Dorit combines her photography with innovative digital art. She creates mixed media exploring a variety of materials; video art, installation art and painting. Her images often express her social/political views. Through her creations, she attempts to call attention to social and cultural issues.

Berit Engen began weaving as a child in Norway, and now practices this ancient craft in the centuries-old tradition of making commentaries on Jewish texts, as well as in creating artistic expressions to reflect the engaging, joyous, and, at times, challenging aspects of Jewish life. She started her project “WOOF & D’RASH – Weaving a Thousand Jewish Tapestries” eleven years ago; it consists to date of about 500 pieces. Weaving with a Scandinavian sensibility, she compares her small-scale linen-yarn tapestries to Japanese haiku: formally constrained by a miniature size, imagistic, and focused, yet allusive. She lives and weaves full time in Oak Park, Ill., and makes frequent presentations on her work in the Chicago area.

Jonathan Franklin was born in Michigan, the son of a civil engineer, Jonathan Franklin spent much of his childhood in Vietnam, Bangladesh, and Indonesia.  After studying art at the University of Michigan, he moved to Israel where he lived on a kibbutz and began painting and working as printmaker.  During that period he also served in the Israeli Army. He is a teaching artist in public schools and has worked in theater both as a set designer and performer.   Jonathan has been a visual artist for over 40 years and lives Oak Park, Ill.

Alan Hobscheid is a Chicago artist working in digital art and painting. Hobscheid’s subject matter ranges from landscapes to images inspired by Jewish themes and texts.  He developed a series of digitally manipulated images based on the biblical story of Jonah, investigating the nature of faith and fate.  Another digital series was recently completed and depicts a personal exploration into his conversion to Judaism.  Hobscheid has shown in numerous local and national exhibits.  In addition, he is a trained cartographer and draftsman, and teaches geography at Roosevelt University in Chicago.

Ellen Holtzblatt exhibits her work nationally and internationally.  Her solo exhibitions include the Chicago Cultural Center, Josef Glimer Gallery, Harold Washington Library and Fermilab Art Gallery.  Her work has been exhibited in numerous group exhibitions such as the Jerusalem Biennale in 2015 and 2017, the Museum of Biblical Art in NY and Inselgalerie in Berlin. Holtzblatt’s work is in public and private collections, including the Joan Flasch Artists’ Book Collection in Chicago and The Center for Book Arts in New York. Holtzblatt has been awarded artist residencies in the US and Iceland. Her projects have been funded by grants from the Illinois Arts Council and City of Chicago Community Arts Assistance.  Holtzblatt earned degrees in visual arts and art therapy from the School of the Art Institute of Chicago.

Judith Joseph is a Chicago based printmaker, painter and calligrapher.  She exhibits widely in solo and group shows nationally and internationally, including Columbia University in New York, the University of Wisconsin-Milwaukee, the Amstelkerk, Amsterdam, the Netherlands, the Zack Gallery, Vancouver, B.C., Canada, the Chicago Cultural Center and the Spertus Museum, Chicago, Illinois. She is managing director for the Jewish Art Collective Chicago.

Carol Neiger was born in Cleveland, Ohio, and received her BFA from the School of the Art Institute of Chicago.
Carol is a painter and printmaker and has exhibited at Woman Made Gallery, Spertus Institute of Jewish Learning, the 24th Evanston + Vicinity Biennial, the Janice Charach Gallery, West Bloomfield, Michigan, and other Midwest galleries. Carol accepts commissions and her work is included in many private collections. She was selected as a Fellow for the Spertus Institute Midwest Artists’ Lab, a year-long course of study which culminated in an exhibition and the formation of JACC (Jewish Artists Collective Chicago) by the twelve artist-fellows, where Carol is a current member and lives in Glenview, Ill.

Dimitri Pavlotsky grew up in Moscow, Russia and has been based in Chicago since 1994. In Russia, he received a rigorous traditional academic education. He felt limited to his technical abilities, which were favored by the culture, over his desire to explore a more emotive and fuller means of expression. He was introduced to modern art while studying architecture in Moscow and later expanded that exposure while attending the School of the Art Institute of Chicago. This allowed Pavlotsky to immerse himself in the possibilities of experimenting with visual languages. Pavlotsky received an MFA degree at Moscow Institute of Architecture in 1986 and has been the recipient of several prestigious national design awards. He left his architectural career in 2018 to concentrate fully on his studio practice of painting.