“Moving between NIU and Chicago, a new world opened up to me through my educational, political, cultural, and social experiences.”

I graduated from Northern Illinois University (DeKalb, Illinois) in August of 1968, after transferring from Graceland College of Lamoni, Iowa (A.A. 1966). I studied painting in the Art Department with Professor Syrek and woodcuts with Professor Mahmoud. I also took art history and art education courses, among others, that led to a Bachelor of Science degree in Art Education. In addition, I minored in Psychology.

I have fond memories of life at NIU, from working in printmaking and painting with those professors, to taking art history courses, methods in Art Education, and doing my first independent study course in African-American art history.  I recall curating a small art exhibit during that period. It was held in the Student Union. 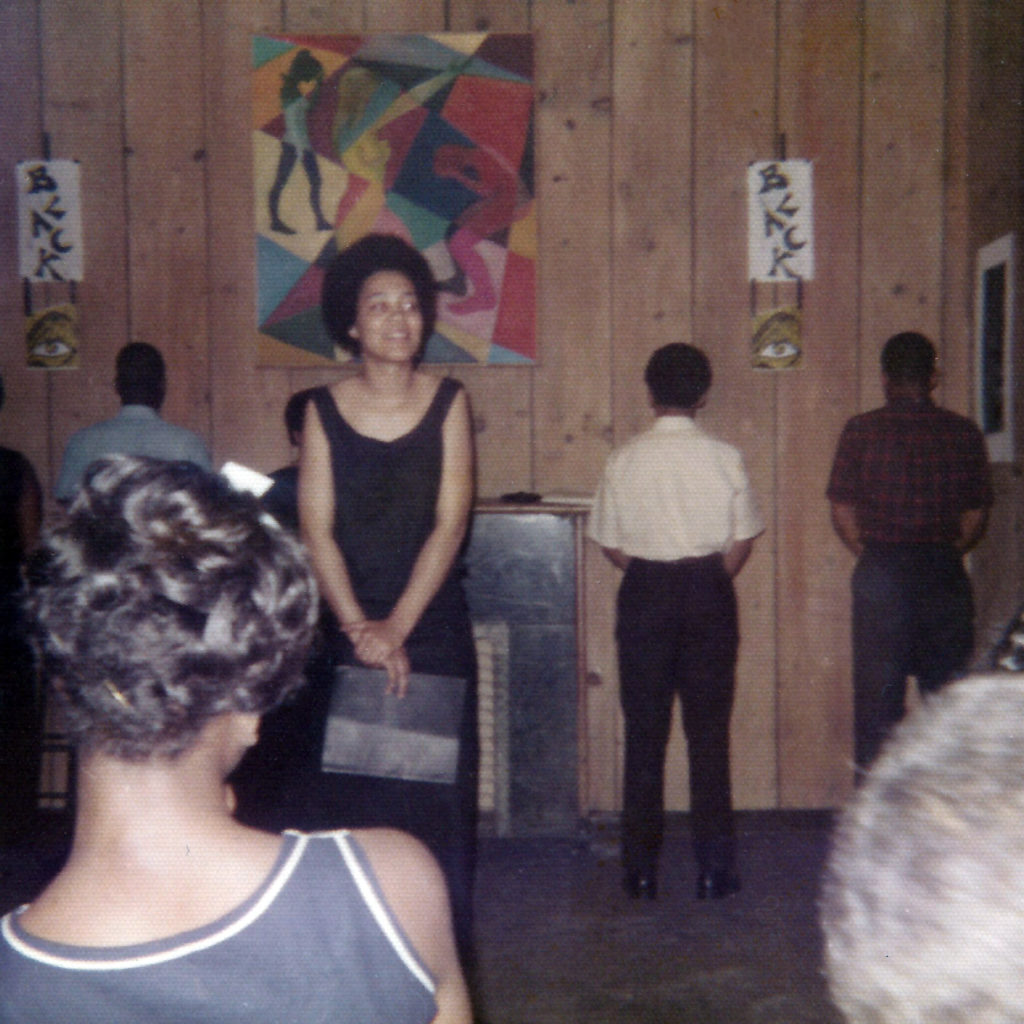 Other pleasant memories of NIU are related to activity beyond the Art Department. For example, I recall representing Williston Hall and winning a traveling trophy in the annual campus-wide dance contest with Curtis, a member of the Kappa Alpha Psi fraternity. I had a great roommate, Geraldine Blissett. Also, I was a founding member of the black student group, African and African American Cultural Organization (AACO).

We vowed to break down the division between Africans and African Americans that was a problem on many campuses across the United States of America. Rukudzo Murapa, a graduate student, was the first president of AACO and I was the first historian. All of us were committed to addressing the political problems of the day, to planning important events to expand cultural awareness, and to expanding cultural diversity on campus, including curriculum, faculty, student, and so on. The activities were eye opening to many of us young optimists.

We often networked with students at Northwestern University (Evanston, Ill.), led by graduate student James Turner. Among the highlights of campus visitors (with funding we acquired from the university) were Muhammad Ali, LeRoi Jones (later Amiri Baraka), and others. Political activists such as Russell Meeks and Fred Hampton of the Black Panther Party (later killed with Mark Clark by the Chicago police) also visited. Unfortunately, as we were planning a future sit-in to emphasize our aims, I informed our group (AACO) that I would not be in DeKalb to participate. The sit-in went on, as I was in Chicago doing my student teaching.

As the oldest of 12 children, I had no intention of not completing my educational responsibilities. My parents, Mr. John Henry High and Mrs. Freddie Drungole High, were our preeminent role models with strong work ethics. My father was a medalled veteran of World War II, a mechanic at Ford Motor Company, and with his truck, he did other work on the side. My mother was a pianist and educator in Mississippi and in Chicago she committed to “staying-at-home” to nurture and educate their 12 children, and worked later after the last one was older.

Our extended family consists of farmers, educators, mechanics, musicians (piano, violin, bass), visual artists, and military servicemen/servicewomen of the United States Armed Forces. I was six years old when we migrated to Illinois (Harvey) from Mississippi, and I had much familial responsibility over the years. By my senior year at NIU, I had a host of N.D.E.A. student loans. I was sorry that I had to leave our student activism to do my student teaching at the time, but I learned and advanced knowledge in the classroom, as I deeply entered the black arts movement, politics, and institutions in Chicago.

After I had taken the methods courses in Art Education, the Art Department was flexible enough to allow me to find a school outside of the ones they had on the roster. The faculty approved my student teaching at DuSable High School in Chicago, under the tutelage of Dr. Margaret Burroughs (printmaker) and co-founder of the DuSable Museum of History and Mr. Ramon Price (artist and curator of the museum).

During that period, as I student-taught, I also visited the DuSable Museum, the South Side Community Art Center (where I later had my first one-woman exhibit), the performances at the Afro-Arts Theatre under Phil Cohran, the poetry readings of Don Lee (Haki Madhubuti) and Carolyn Rogers, the dances of Darlene Blackburn (with whom my sister Thelma danced), and the studios and homes of Afri-COBRA—Jeff Donaldson, Barbara Jones, Napoleon Jones-Henderson, and others. The willingness of the NIU faculty regarding my independent study of African-American art (there were no such courses on campus at the time) and the approval of my student teaching program in Chicago opened a new world of African-American art history and culture to me that had a tremendous impact on my future. I subsequently studied printmaking and painting, conducted more independent study of African and African-American art history at the University of Wisconsin-Madison as I worked on my M.A. and M.F.A (Advisor, printmaker Ray Gloecker).

I then studied African art (CIC program) in the Roy Sieber School at Indiana University-Bloomington (mentored by Roslyn Walker). After earning the degrees at UW-Madison, I was offered a position as Artist-in-Residence in the newly formed Department of Afro-American Studies at UW-Madison in the fall of 1971. In 1972, I was offered an Assistant Professor position to develop the art history curriculum in the Culture Area of Afro-American Studies with a joint appointment in the Art Department to teach an art seminar and a studio course. After one year, I focused full-time on developing art history and culture curriculum for our undergraduate and graduate programs in Afro-American Studies, expanding to gender and women’s studies, and visual culture, over time, while teaching the art seminar and independent studio courses for the Art Department.

It was many years later that I went to the University of Chicago to study Modern Art and Primitivism (Advisor, Reinhold Heller) and the new area of Visual Culture (W.J.T. Mitchell). My appointments in Afro-American Studies in 1971 and 1972 were timely, since in the late 1960s and early 1970s, departments and programs of Black/Afro-American Studies were being initiated across the United States of America. I was much apart of that history because in the mid-1960s the NIU faculty and program were flexible enough to facilitate my expanding research interests, and the expanded urban location in Chicago, as I met department requirements.

I share these developments in my life as the first African-American art student to graduate from the Art Department at Northern Illinois University. I have since visited NIU and found diversity in the student population on campus; it was minimal when I was a student. That was great to see, as it was a critical aspect of our vision as young optimists of the 1960s.

Given my experience, our collective vision and work in AACO, the responses of the administration toward our aims, and the forward thinking flexibility of faculty in the Art Department in mid-1960s, we were all variably planting the seeds of change and diversification amidst the Civil Rights/Black Power crisis in our country. Outside of the Art Department on campus, there was much racial tension, political activism, and debates among students that linked to the political conditions of our nation.

The intellectual forums and cultural activities of AACO, the exchanges with Northwestern students, and the interaction with seminal educators, artists, and cultural and political figures of Chicago were all important aspects of my education and socio-cultural-political life at and beyond NIU.

What a change my NIU experience was from my first two years of college at the private, religious college (The Reorganized Church of Jesus Christ of Latter Day Saints, now Community of Christ) in Lamoni, Iowa (Graceland College, now University), where I sang in Chapel Choir, participated in a memorable play, The Silver Whistle, went on hayrides, sang religious and folk songs around campfires, went skating to music (there was no dancing allowed on campus), and sketched and painted landscapes en plein air, as I studied Art with Professor Les White, literature with Dr. Barbara Higdon, and Liberal Arts with others from 1964-1966.

That initiation was a fantastic introduction to higher education, with a caring religious campus life away from home, the personal interest and aid of my Dean of Students, Dr. Harold Condit, with whom my best friend, fellow-student JoLeah Ivy, and I lived and babysat during our freshman year. It was an idyllic, friendly atmosphere made by faculty, administrators, and students, and the best corn in the country. However, Time Magazine, Newsweek, and newspapers showed me that something very powerful was happening across the nation, that political unrest had erupted across the country in response racial discrimination and oppression, and that I needed to go elsewhere to get involved. That is when I transferred to Northern after two idyllic, religious years in Iowa.

At NIU and moving between NIU and Chicago, a new world opened up to me through my educational, political, cultural, and social experiences on campus and in Chicago.

On April 4, 1968, while I was doing my student teaching at DuSable High School, Dr. Martin Luther King, Jr. was assassinated.

Chicago was on fire, as was the rest of the nation, as African-Americans and others responded with outrage, and the National Guards with rifles and bayonets filled the cities. Amidst this turbulence, as an NIU student, I was also being educated in situ by the political conditions and activism of urban Chicago in 1968. That summer, I conducted interviews with Jeff Donaldson (Afri-COBRA), Robert Sengstacke (photographer), Roy Lewis (photographer), Howard Seals (painter) and Douglas Williams (sculptor)—both variably directors of the South Side Community Art Center—and other artists and photographers who captured the aesthetics, culture, and politics of the time. This independent study fulfilled the last credit that I needed to graduate from Northern Illinois University.

This history at NIU/Chicago was a critical aspect of the springboard of my career—preceding my long career as a UW-Madison professor, mentor, artist and art historian—long before my marriages and four children who are variably immersed in the visual and performing arts, education, and business.