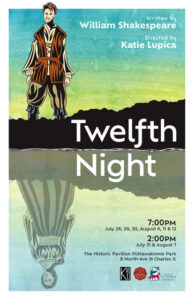 Kane Repertory Theatre, founded in 2019 by a group of alumni from the NIU School of Theatre and Dance, in partnership with the St. Charles Park District, presents a live outdoor production of the Shakespeare classic “Twelfth Night” at the Historic Pavilion on the Fox River. The play is directed by Northwestern MFA Directing candidate Katie Lupica. It premieres July 28th at 7 p.m. and runs through August with its last show at 7 pm on August 12th. Tickets can be purchased online.

“Twelfth Night” is a fast-paced romantic comedy with several interwoven plots of romance, mistaken identities and practical jokes. Separated from her twin brother Sebastian in a shipwreck, Viola disguises herself as a boy, calls herself Cesario, and becomes a servant to the Duke Orsino.

“Twelfth Night, though not set in a particular season, takes its title from the twelfth day of Christmas, the day when the partying has gone on and a festival season is coming to a close,” says director Katie Lupica. “Our Illyria, staged outside in July, is a summer beach party that doesn’t know how to end. It’s a good time, but its residents are stuck in habits of excess of one thing or another–unrequited love, drink, self-importance, even mourning. That is, until an unexpected visitor washes ashore. Viola, shipwrecked and out of place in this carnival world, brings a breath of fresh air that stirs up discovery, mischief, and eventually true love, catching the most self-serious the most off-guard. With such themes of renewal and invitations to take the blows of life a little more lightly, it is not surprising that “Twelfth Night” has historically been chosen to reopen theaters after times closure. For our audiences, I hope it will be like a summer breeze after the relative airlessness of the last two years. I am excited for people to come together in St. Charles to follow a delightfully tangled story of relatable, surprising, and often hilarious characters getting the kind of shake-up we could all use–to be refreshed, amused, intrigued, and renewed.”

Kane Repertory Theatre, in partnership with the St. Charles Park District, presents a live outdoor production of Twelfth Night by William Shakespeare directed by Katie Lupica. Performances are July 28-30,  August 6, 11 and 12 at 7 p.m. with 2 p.m. performances on July 31 and August 7. Tickets prices are $30 for adults, $25 for seniors, and $15 for students.
This play is recommended for all ages. For tickets and more information visit them online.