School of Theatre and Dance presents “The Language Archive” 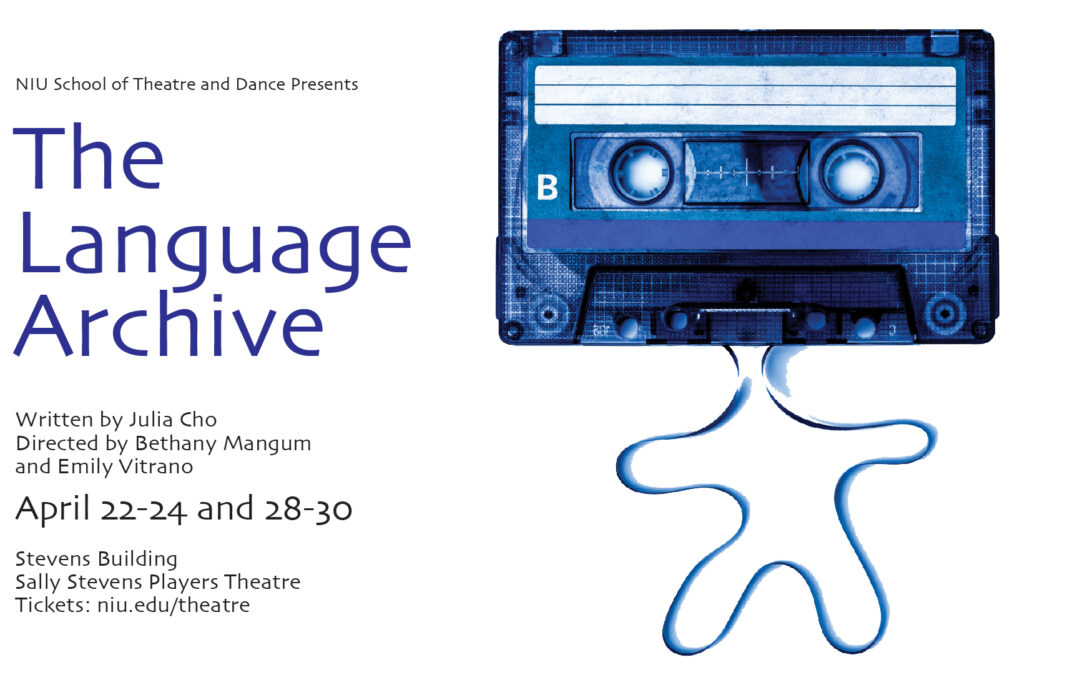 Researchers studying a dying language become involved in a love triangle in this absurdist farce that teases out the quirky differences between what’s expressed and what’s meant in “The Language Archive” written by Julia Cho, directed by Bethany Mangum-Oles and Emily Vitrano, and running in the NIU School of Theatre and Dance’s Sally Stevens Players Theater April 22-24 and 28-30.

Tickets are available at the online box office and are $7. NIU students are admitted free of charge.

Brennan James (George) – is a second year BFA candidate. This is Brennan’s first show here at NIU and he is beyond grateful for this opportunity. This past summer he was involved in Studio Vibe’s “Shrek the Musical” as Donkey and is currently cast in “Matilda the Musical” as Mr. Wurmwood. Brennan would like to thank his parents for their continuous support through and through. He is ecstatic to share this experience with you in hopes that the story opens the outlook on your own personal language!

Isabelle Ajemian (Emma) – is a third year BFA Acting candidate. She has appeared in a couple of previous productions here at NIU, which include “A Bird in the Hand” directed by Bethany Mangum-Oles and “Everybody” directed by Edwin Lee Gibson. This will be her first in-person performance since 2019 and is so excited to share this piece of work that is so close to her heart.

Emma Mansfield (Mary) – is a second year BFA acting candidate and is excited to make her acting debut here at NIU. Hailing from Sault Ste Marie, Michigan; Emma has had years of experience studying throughout the mitten state. Some of her previous credits include #13 in “The Wolves,” Rizzo in “Grease,” and Miranda in “The Tempest.” She is thankful to, once again, perform with a live audience and is thrilled to share this story with you.

Zachary Harness (Resten) – is a third year BFA Acting candidate. Previous NIU credits include Fedotik in Anton Chekov’s “Three Sisters” B in “Town Hall,” Fish and Gaffles in “The Resistible Rise of Arturo Ui.” You can see him this summer at Notre-Dame Shakespeare Festival in South Bend, Ind., as Bertram in “All’s Well That Ends Well,” and Tybalt in “Romeo and Juliet.” He hopes that you enjoy the show.

Naava Ofri-Akman (Alta) – is a third year BFA Acting student. Previous credits include “A Bird in the Hand” and “Everybody.”

Jasmyn Richardson (Instructor/Old Man/Passerby/Conductor/Zamenhof) – Jasmyn Richardson is a second year BFA Acting student from Chicago. This is her debut performance on the NIU stage. She is so excited to share this lovely performance with you and hope you all enjoy the show!

Julia Cho (Playwright) – Julia Cho “Labels are the way we make the world convenient” says playwright Julia Cho. Somewhat inconveniently, she rejects “Korean American” and identifies herself as simply as “American.” Born in 1975 to Korean immigrant parents on the West Coast, Cho explains “It was a very porous household. For me to say that being of Korean origin influences my work is the same as saying being a woman or being American influences my writing.” She cites Caryl Churchill, Chekhov, Chay Yew, and Sarah Ruhl as her “playwriting heroes.” Charles Isherwood, in his review of her 2016 play “Aubergine,” praises her
“perceptive sense of the invisible barriers that mysteriously spring up between people, and the equally mysterious impulses that bind them together.” Language and mortality are important to Cho. “The Language Archive,” a play about the death of languages, combines two of her favorite themes. Cho is a graduate of Amherst College, New York University and the Juilliard Playwrights. She teaches at UC Berkeley.

Bethany Mangum-Oles (Director) – Bethany is an actor, director, educator, and mama of two born and raised in southern California. Marking her ninth directed production with NIU, she is thrilled to be returning to the studio this season with her co-direction of “The Language Archive.” Bethany holds a BFA in acting from California State University, Fullerton, and an MFA in acting from NIU where her studies have taken her abroad to the Moscow Art Theater School in Moscow, Russia and the Adana International Theatre Festival in Adana, Turkey. Since gaining her MFA, she has found her artistic home here at NIU as full-time Performance Area Faculty. Bethany also serves as Rotating Voice and Movement Faculty at the Gately-Poole Studio, is a Certified Intimacy Captain, and currently in training for her Trauma-Informed Yoga Teacher Certification. Next semester at NIU, you can catch her direction of Sarah Ruhl’s “Melancholy Play.”

Emily Vitrano (Director) – Emily Vitrano is very excited to share “The Language Archive “with the NIU community. Emily is an Instructor of acting, voice, and movement at NIU, and an actor, director, and writer making her creative home in Chicago. She holds a BFA in Acting from the University of North Carolina at Greensboro and an MFA in Acting from Northern Illinois University. She is a certified yoga instructor at the 200-hour level, and recently became certified in Mental Health First Aid. Working as a director and intimacy coordinator, Emily utilizes foundational principles created by theatrical intimacy education. These consent-based practices rely on the foundational understanding that consent is contextual, conditional, and revocable and include establishing and respecting boundaries, a de-loaded process, choreography, and documentation. As an actor, Emily has worked regionally on many stages, including: Milwaukee Repertory Theater, Milwaukee Chamber Theatre, Next Act Theatre, Renaissance Theaterworks, and Allentown Shakespeare in the Park. Emily has also appeared on television in a national commercial for Batteries/Bulbs Plus, and regional commercials for Mills Fleet Farm, Sanford Brown University, and Walgreens. Emily is a proud member of Actors’ Equity Association and is represented by Talent X in Chicago. For Miles, Henry, and Ani: Mir Ne Glessalla, I never want you not with me.

Hani Jung (Assistant Director) – Hani is a fourth year BA Theatre Studies candidate at NIU. This is her second show as an assistant director, and she is very excited and grateful to be a part of this production of “The Language Archive.”

Jessica Ferreira (Stage Manager) – Jessie is a senior BFA Design and Technology student at NIU pursuing stage management. This is her first show as stage manager at NIU and she has immensely enjoyed her time working on “The Language Archive.” Previously Jessie has been a part of “Everybody” (NIU) and “Twelfth Night” (NIU) as assistant stage manager.