NIU School of Theatre and Dance presents “You Are You” 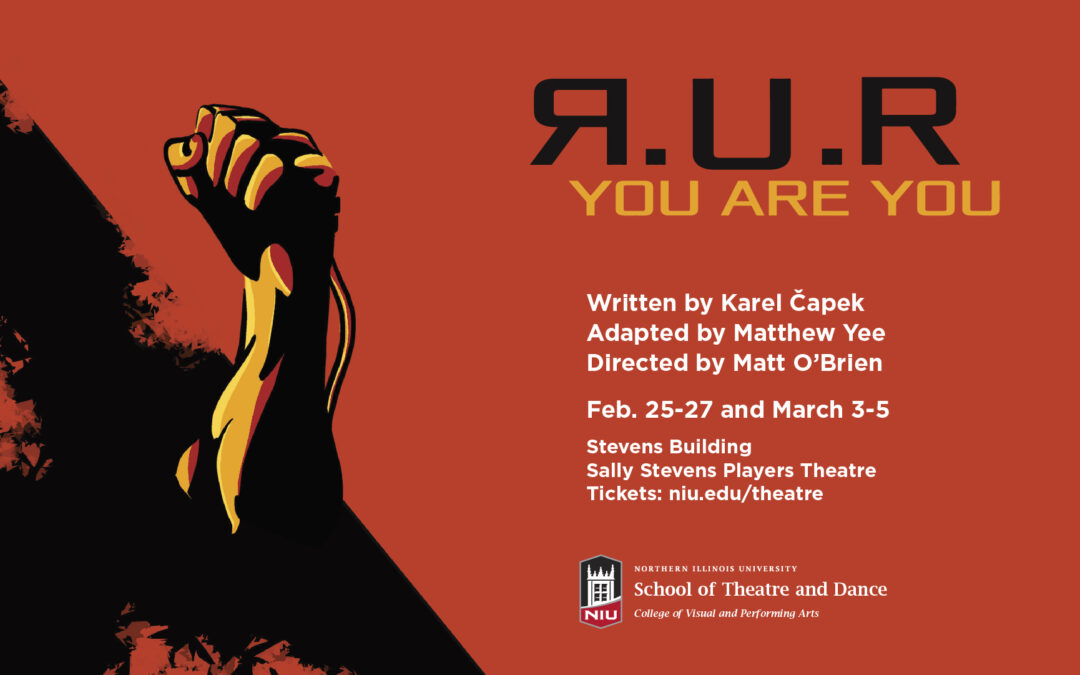 The NIU School of Theatre and dance presents a new work by alumnus Matthew C. Yee titled “You are You” based on characters from Karel Čapek’s play “RUR.”

Before “RUR” there were automatons and androids, but this is the play that gave us the word “robot.” Čapek’s 1921 play tells the story of a dystopian world where a corporation creates synthetic humans that become a servant class and eventually revolt. The production is directed by Matt O’Brien of GreatWorks Theatre Company.

Tickets are available online or by calling the Annette Johns Box Office at (815) 753-1600. NIU students can attend free of charge by pre-reserving their ticket.

Amanda Ranallo (Ana) is a junior BFA Acting candidate and is pumped to share You are You with U! Amanda’s past NIU SoTD productions include “Town Hall” by Caridad Svich and “Love and Information” by Caryl Churchill. She is beyond grateful for this experience and hopes you enjoy.

Caitlyn George (Gus Toocool/Reporter 2/Robot 1/Agent/Bus Woman) is delighted and excited to be in her first ever play in the School of Theatre and Dance program. She has very little theatre experience but has been an extra in the Stagecoach production of “Shrek the Musical” in 2015. She is a BA major with a dream to go into musical theatre in the near future.

Jeffrey Bozek (Marius) is a sophomore BFA Acting candidate here at NIU, and this is his first ever show here. He has been in shows before through his high school and outside of school he does competitive hip-hop dancing. He’s very proud of everyone who put in their hard work to make this play what it is now. He’s excited to share this story with you and he hopes you enjoy the show!

Katherine Drury (Mimi) is a junior BFA Acting candidate and dance minor. Originally from Nashville, Tenn., this is Kate’s third play here at NIU. She was previously seen in “Bird in the Hand” and “Edward II,” along with the past three faculty dance concerts. Catch her in the NIU School of Music’s Stephen Sondheim tribute concert later this semester!

Lauren Krelle (Ensemble) is a second-year BA Theatre Studies candidate. She is very excited to be a part of this adaptation of RUR. This is her second show at NIU. She has was previously seen in last semester’s production of “Edward II.” She is grateful for the training and opportunities she has received through the School of Theatre and Dance.

Rylan Johnson (Tyler/Reporter 1/Father) is a second year BFA Acting candidate. This is his first production with NIU. Previous notable performances are “Macbeth” as Banquo (College of DuPage), “Cinderella” as Sir Sebastian (CYT Chicago), “Elf the Musical” as Santa Claus (CYT Chicago) and “The Music Man” as Mayor Shinn (CYT Chicago). Rylan would like to thank everyone involved in the creation of this show for making it a fun and enjoyable process! Please enjoy the show!

Samantha Bliss (Sulla) is a junior BFA Acting candidate. Sam’s past NIU credits include “Edward II,” “Angels in America,” “A Bird in the Hand,“ and “Rogues’ Gallery” (Third Onion Series). Some of her favorite past credits from Commonwealth Theatre Center include Hermione in “The Winter’s Tale,” Queen Elizabeth in “Richard III,” and Aaron Kriefls and others in“The Laramie Project.” She is very excited to share this play with all of you! And remember, You are You.

Vincent J. Augustine (Rossum) – Greetings you, Vincent is officially a senior BFA Acting major at Northern Illinois University. Vincent was recently seen in “R&J” at Kane Repertory Theatre and as Drosselmeyer w/Beth Fowler Dance Studio at Dekalb’s Egyptian Theatre. His past NIU credits include Paris in Shakespeare’s “Troilus and Cressida,” Gabriel in “Bird in the Hand” by Jorge Ignacio Cortinas, and in “Town Hall” by Caridad Svich directed by Azar Kazemi. Vincent would like to give special thanks to his director Matt O’ Brien for his direction and vision, Cheers and enjoy the show!

Will Pavin (John/Guard/Radio Voice/Robot 5) Will Pavin is a theater minor and business marketing major. He is a senior set to graduate in May. This will be his first mainstage and first show at NIU. He has had an interest in acting since he was a teenager. His acting journey began towards the end of his high school career. He performed in Shakespeare’s “Much Ado About Nothing” with some singing performances here and there. He continued his studies at McHenry County College for three years before transferring to NIU. Will is looking forward to sharing this show with everyone and hopes you enjoy the show.

Matt O’Brien (Director/Sound Designer) is pleased to return as a guest artist at NIU School of Theatre and Dance, having previously directed “The Time of Your Life,” “The Marriage of Bette and Boo” and ‘By the Bog of Cats.” Matt is producing director for GreatWorks Theatre of Chicago, a national touring company with fourteen productions for student audiences. He has served as executive and/or artistic director for a number of companies and festivals throughout the US, including Irish Repertory of Chicago, Metropolis Performing Arts Centre, and the Vail/Beaver Creek Theatre Festival in Colorado. Many thanks to the SoTD leadership, faculty, and staff for the opportunity to work with this next generation of performing artists and designers.

Jonathan McLawhorn (Assistant Director) Jon is very excited to Assistant Direct his third and final SoTD production, after “Kernel of Sanity” and “Polaroid Stories.” Jon is a Theatre Studies Major with an emphasis in directing/writing. He’s also co-founded, produced, and directed shows in the 24 Hour Festival here at NIU (2019-Present). Jon is so thankful to his family and friends who support him, and to all that have made his time here at NIU one he will never forget.

Sarah Blickem (Stage Manager) is elated to be stage managing her first show at NIU. She is a BFA Design Tech major with emphasis in stage management/props design. She would like to thank her parents and friends, as well as her team, crew, and cast for giving her a fantastic experience as her first show.

Aryn Carr (Costume Designer) a first year MFA costume design student from Mobile, Ala. After designing shows at the educational and regional theater levels, Aryn decided to pursue her MFA to hone her skills and learn new techniques. She is very excited for her first design at NIU and is grateful for the opportunity to tell this story alongside so many talented artists.

Emily Vitrano (Intimacy Coach) Emily is an Instructor of acting, voice and movement at NIU, and an actor, and writer making her creative home in Chicago. She holds a BFA in Acting from the University of North Carolina at Greensboro and an MFA in Acting from Northern Illinois University. As an intimacy coordinator, Emily utilizes foundational principles created by Theatrical Intimacy Education. These consent-based practices rely on the foundational understanding that consent is contextual, conditional, and revocable and include establishing and respecting boundaries, a de-loaded process, choreography, and documentation. Emily is a proud member of Actors’ Equity Association.