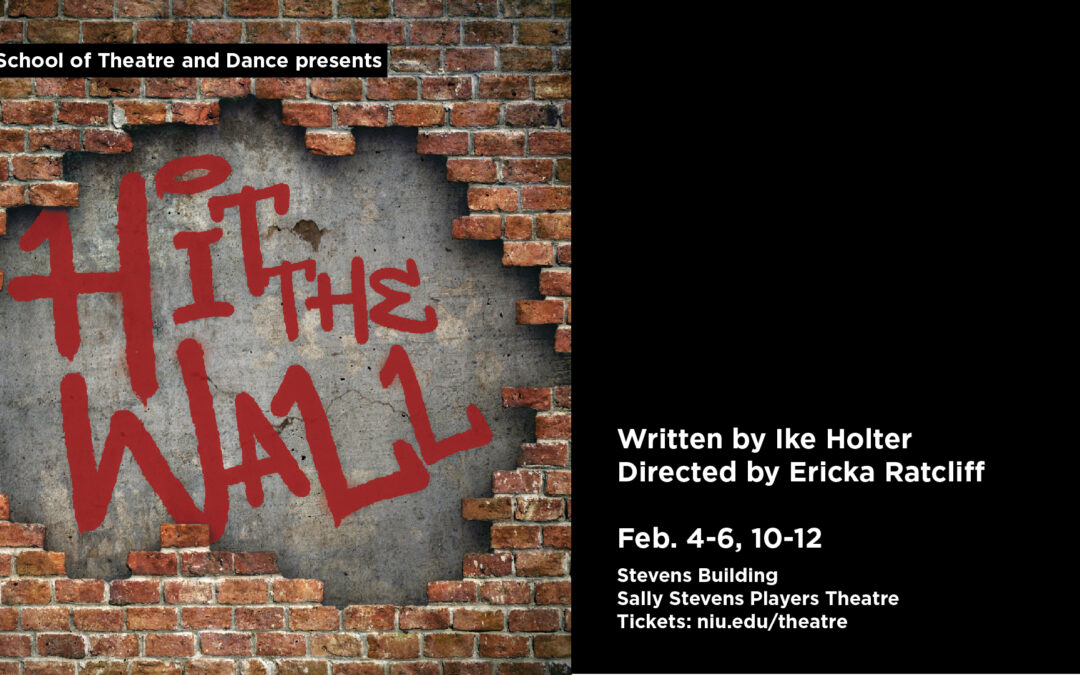 The NIU School of Theatre and Dance presents “Hit the Wall” running February 4-6 and 10-12 in the Sally Stevens Players Theatre in the Stevens Building on NIU’s main campus.

It’s 1969, summer in New York, and Judy Garland is dead. Police raid the Stonewall Inn on June 28, sparking several days of protests and birthing the modern gay rights movement. We all think we know this story. Chicago playwright Ike Holter explodes this myth, using fictionalized characters to retell history and make it live again for a new generation of activists.

The show is directed by Ericka Ratcliff, the artistic director of Congo Square Theatre Company where she “works to amplify the mission of celebrating the complexities of Black life and culture on stage.”

Tickets are available online or by calling the Annette Johns Box Office at (815) 753-1600. NIU students can attend free of charge by pre-reserving their ticket.

Johnathan Samuel Allsop (Carson) is a third year MFA Acting candidate at Northern Illinois University. Jonathan received his BA in Music from the University of Pennsylvania before moving to Chicago. Some of his credits include: Sir Toby Belch in “Twelfth Night” (Northern Illinois University), Peter Quince in “A Midsummer Night’s Dream” (Notre Dame Shakespeare Festival), Bus/Dryer (swing) in “Caroline or Change” (Firebrand Theatre), “Concrete Jungle” (Goodly Frame Theatre), Samuel in “Pirates of Penzance” (Savoyaires), and Leroy in “A Bright New Boise” (Northern Illinois University). He also performs with the renowned music improv group “Baby Wants Candy” at the Second City. Jonathan is also a singer and his debut album, Lavender Therapy, is available on all streaming platforms. To learn more about Jonathan and his work visit jonathanallsop.com.

Nicholas James Bishop (Cop) is a sophomore BFA Acting student at Northern Illinois University. He has played many extra roles in several television and movie productions. Some of his favorite roles include Fuckhead in “Art Collectors” (Bryce Schwerbrock), Macbeth in “Macbeth” (Elgin Theater company), Rhode in “Three Sisters” (Alex Gelman), and Taste Tester in “Cookie Dough Commercial” (Olivia Cunnally). After the four years at NIU Nicholas plans to move to Moscow, Russia to pursue his acting education there.

Gabriel Montgomery (Cliff) is a fourth year BFA in acting candidate. His previous credits at NIU include Key Key in “The Walk Across America for Mother Earth, The Artist in “The Time of Your Life,” Butcher in “The Resistible Rise of Arturo Ui,” and S in “Town Hall.” Gabriel is excited to start his final semester at NIU with “Hit the Wall” and the rest of its members, bringing this historical moment to life.

JoLan Lacy-Jones (Roberta) is a fourth year BFA Acting candidate here at Northern Illinois University and this is her sixth show. She is very blessed and grateful to work with an amazing cast and with an amazing director. JoLan has learned and grown over the past three years at NIU, even through the pandemic JoLan has become a stronger actor. You may have seen JoLan in past NIU’s productions: “The Castle” as Olga & The InnKeeper’s Wife, “Bike America” as Rorie, “Summertime” as Mimi and NIU’s last year’s production “Edward The Second” as Warwick. JoLan is very excited and thrilled for everyone to watch the show and hopes everyone enjoys it as much as she does.

Maya Paletta (A-Gay) is a second year BFA Acting Candidate and is honored to be making her NIU acting debut. Recently you may have seen her in the NIU Fall Dance Concert: Best of Broadway, featured in the Westside Story Mambo, and 42nd Street opening number. Hailing from Seattle, Washington Maya has had many years of training in theatre, dance, and voice with companies all across the Puget Sound. She would like to send thanks to everyone involved in this production, and all those working to keep theatre alive in these trying times.

Shraga D. Wasserman (Newbie) is a year three MFA in Acting candidate. A native of Iowa City, Shraga graduated from the University of Northern Iowa with a BA in Interdisciplinary Performing Arts with emphases in music, art, and theatre. They spent the following four years based in Minneapolis before relocating to pursue further training at NIU. Their favorite roles past include Moritz in “Spring Awakening” (Theatre Cedar Rapids), Marius in “Les Misérables” (TCR), Jamie in “The Great God Pan” (UNI), Peter in “Peter and Alice” (Candid Theater Co.), and Paul in “Quilt: A Musical Celebration” (MJP Theatrical / Candid NYC). Shraga is glad to be making art in these unwieldy times.

Megan Thompson (Madeline) is a junior BFA in acting candidate from Louisville, Kentucky. Some past credits include Chorus of Women in “The Trojan Women” (Commonwealth Theatre Center), Lennox in “Macbeth” (Commonwealth Theatre Center), A Flamingo in “Bird in the Hand” (NIU), and Mom in “Bike America“(NIU). This is her first live production here at NIU! Cheers to returning back to live theatre!

Tomás Dakan (Tano) is a lifetime resident of Southern California and attended Occidental College where he spent some time abroad at the London Dramatic Academy and graduated with a B.A. in Theater. Some of his other favorite roles there include Solyony in “Three Sisters,” Todd in “Far Away,” and Chip in “The 25th Annual Putnam County Spelling Bee.” Other credits include “Twelfth Night,” “Nabucco,” and “The Merry Wives of Windsor” among others. He’s also been a part of Universal Studios: Halloween Horror Nights for the 2017 and 2018 seasons. After completing his thesis role as Andre in “Three Sisters,” Tomás is really excited to get one more time on stage as Tano in “Hit the Wall.” Reach him @Tomas_Acts_Up on Instagram.

Shannon Austin-Goodin (Peg) is a BFA Acting candidate in her third year here at NIU! Her previous credits at NIU include “A Bird in the Hand” and “Town Hall.” She is so excited to share this beautiful show with you!

Ericka Ratcliff (Director) is very excited to work with the uber talented students of NIU in collaboration with this relevant and raucous production. Ericka is Artistic Director of Congo Square Theatre Company where she works to amplify the mission of celebrating the complexities of Black life and culture on stage.  She has worked as an actor regionally and locally with Second City, Steppenwolf, Northlight, Victory Gardens, Chicago Shakespeare, Collaboraction, Mixed Blood, Milwaukee Rep, Kansas City Rep, CENTERSTAGE, Pittsburgh Playwrights and Alliance Theater to name a few. Ericka is also an artistic associate with Lookingglass Theater and an emeritus ensemble member with The House Theatre of Chicago.

‘What happened at Stonewall happens…all across the world. I hope you walk away remembering the sacrifice so many made at Stonewall the summer of 1969 and in the words of Gay Rights Activist Marsha P. Johnson “You never completely have your rights, one person, until you all have your rights.” Enjoy the show and Fight On!’

Elias Dennis (Costume Designer) (they/them) is a first year MFA costume design student. They have a Bachelor’s in Theater from Southern Illinois University. After traveling the Midwest, south, and parts of the southwest, pursuing dreams of freelance costuming, Elias has returned to theatre and academia. They are very excited for their first design at Northern Illinois University and grateful for the opportunity to be a part of this production.

Ashley-Marie Chávez (Assistant Director) is a fourth year BFA Acting Candidate, she had such a great time learning from Ericka and the talented cast throughout this process. She hopes you enjoy the show and continue to share these important stories!

Victor Hugo Jaimes (Stage Manager) is a recent graduate from NIU with a BFA in Theatre Arts: Design and Technology. His previous roles range from properties designer, scenic painter, assistant scenic designer, and assistant director. Victor has had the pleasure of working for the Lyric Repertory Company in Utah as their props assistant, and the Chicago Opera Theater as run crew. He’s grateful for the opportunity to come back and stage manage for the school. He hopes everyone enjoys the show as much as he enjoyed being a part of it.

Emily Vitrano (Intimacy Coach) is pleased to work with Ericka and the cast of Hit the Wall. Emily is an Instructor of acting, voice and movement at NIU, and an actor, and writer making her creative home in Chicago. She holds a BFA in Acting from the University of North Carolina at Greensboro and an MFA in Acting from Northern Illinois University. She is a certified yoga instructor at the 200-hour level, as well as certified in Mental Health First Aid. She is currently pursuing her MA in Women’s Studies and Gender Studies from Loyola University in Chicago. Emily hopes to bring greater awareness, conversation and scholarship to the untold stories of women in an effort to shape global conversation. As an intimacy coordinator, Emily utilizes foundational principles created by Theatrical Intimacy Education. These consent-based practices rely on the foundational understanding that consent is contextual, conditional, and revocable and include establishing and respecting boundaries, a de-loaded process, choreography, and documentation. As an actor, Emily has worked regionally on many stages, including: Milwaukee Repertory Theater, Milwaukee Chamber Theatre, Next Act Theatre, Renaissance Theaterworks, and Allentown Shakespeare in the Park. Emily has also appeared on television in a national commercial for Batteries/Bulbs Plus, and regional commercials for Mills Fleet Farm, Sanford Brown University, and Walgreens. Emily is a proud member of Actors’ Equity Association.

The NIU School of Theatre and Dance follows the COVID-19 safety protocols of the university. The guidelines are updated as conditions change. At this time, face coverings are required in all indoor university spaces including our theatres. Updated information is available at: niu.edu/protecting-the-pack.