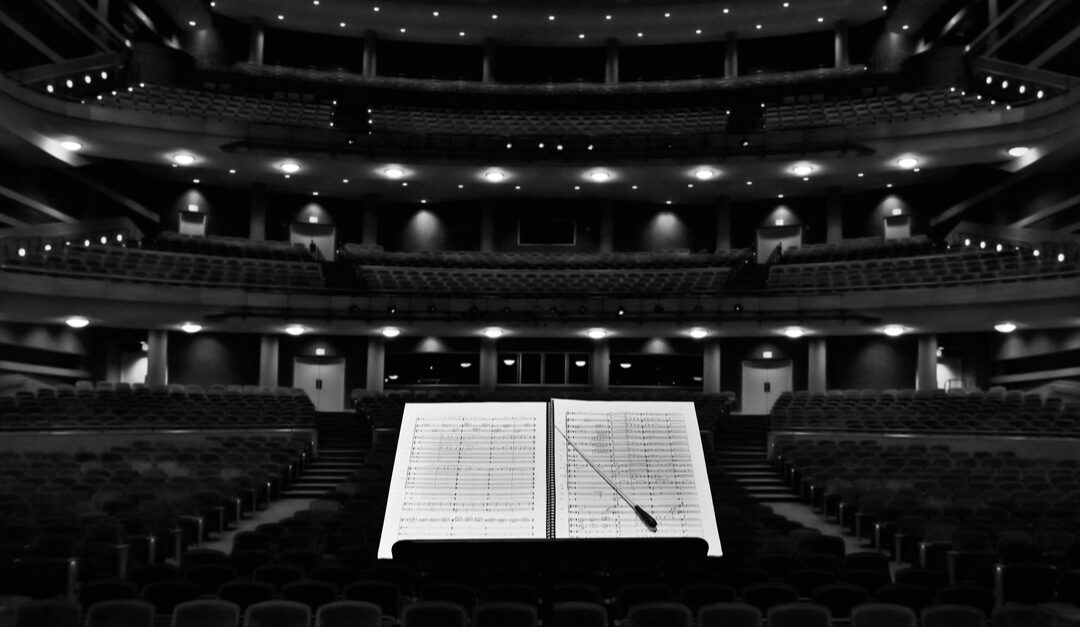 Izabella Gieron knew she wanted to be a conductor since high school, and as she completes her degree in the NIU School of Music, an internship this year with the Metropolitan Youth Symphony Orchestra (MYSO) has given her the chance to get hands-on experience.

“My high school band teacher, Jeanette Soebbing (Argo High School, Summit, Ill.), is an amazing conductor,” Gieron said. “Watching her movements; the way she expressed the music only through hand and arm gestures felt unreal. From that moment, I knew that was something I needed to study. I tell her to this day that she’s the reason I am doing conducting.”

Gieron is majoring in music education and violin performance, with independent study in conducting. She’s a senior who will graduate in May, and is grateful for a long awaited opportunity to study conducting.

“I knew all along I wanted to be a double major, so I stuck with that. We had conducting classes which were fun, but it wasn’t until Dr. [Benjamin] Firer came that this opportunity was given to me. He emailed us and asked if anyone would like to take lessons with him and I responded in a heartbeat. It was something I always wanted to do, and when that opportunity came up, I was going to take it.”

Firer is a visiting assistant professor who teaches music theory, orchestration, advanced orchestral conducting, orchestral literature and directs the NIU Philharmonic Orchestra and Opera Theatre. Last summer he was named to replace retiring, longtime MYSO music director Lawrence Sisk, and it turned out to be a great opportunity for Gieron, too.

“Dr. Firer had mentioned that he had an idea of how to keep me involved, as he knew this was something I have always wanted to do,” Gieron said. “He helped create an internship/assistant conductor position, and ever since then, I have been part of MYSO. It’s always something I look forward to during the week. It’s so much fun, and I get to make music with all of these young musicians.”

MYSO was founded in 1959 and seeks to promote and challenge talented young orchestral musicians by providing an opportunity to perform repertoire of a wide variety of styles and historical periods. Membership includes junior high and high school students form Joliet and 21 surrounding communities, as well as students from Lewis University and Joliet Junior College.

Gieron’s duties as assistant conductor puts her in charge of sectionals, marking the bowings, doing playing tests, grading playing tests and provides her opportunities to conduct the orchestra, which includes being given a piece of music to conduct in every single concert.

“Witnessing Izabella’s journey into a skilled conductor has been a highlight of my time at NIU,” Firer said. “Her natural ability on the podium and outstanding leadership qualities make her a perfect match for the MYSO internship.  It’s a special experience seeing our students take what they’ve learned at NIU and make an impact.  Izabella has an extremely bright future in music, I couldn’t be more proud of her.”

COVID-19 presented challenges for the orchestra. “Everyone is six feet apart and this year, we’re only doing strings,” Gieron said. “In the beginning, it was quite challenging; the sound reflection was totally unbalanced and delayed as we were all spaced out. To adapt to the unordinary circumstances, Dr. Firer and I had to train the musicians to not try to listen to others, but to concentrate more on watching the conductor to resolve the sound delay dilemma. Eventually, the students started adapting and teaching in an uncommon environment was normalized. Things are going well.”

Gieron has also had the chance to study and perform with the Avalon String Quartet, the artists in residence at NIU. “Blaise Magniere [Avalon String Quartet member and Richard O. Ryan Endowed Chair in Violin in the School of Music] was my primary teacher,” Gieron said. “He opened my eyes to how important it is to study basic material. When you really understand the fundamentals, you can perform or do anything. Now in my teaching, I apply all that I’ve learned and make it a good habit to pass on the knowledge I have been given. There’s a quote I always like to use, ‘In order to be a good teacher you have to be a good musician.’ I’m so happy he prepared me for that.”

As she looks at graduate schools, Izabella also reflects back on the opportunities she was presented with at NIU that have helped her chart her path. “It’s definitely been life changing and eye opening,” she said. “Especially with conducting. Dr. Firer knew I was serious, and he definitely raised the standards and had very high expectations. I studied Stravinsky’s “Rite of Spring” which is one of the most challenging pieces ever written. I conducted a Beethoven symphony and a Haydn symphony as well. We have done intense score studying and provided me with different resources and materials to practice. It is one thing to learn how to wave around your hands to conducting, but what I cherish the most from these experiences were learning the deeper side of the art of conducting. To understand the meaning of the piece, to study how the composer wrote each piece and what they did to achieve such musical success – things that are often forgotten when studying music. I can move around my arms and conduct a musical composition, but music is more than that. It’s about the meaning and the feeling of performing it.”