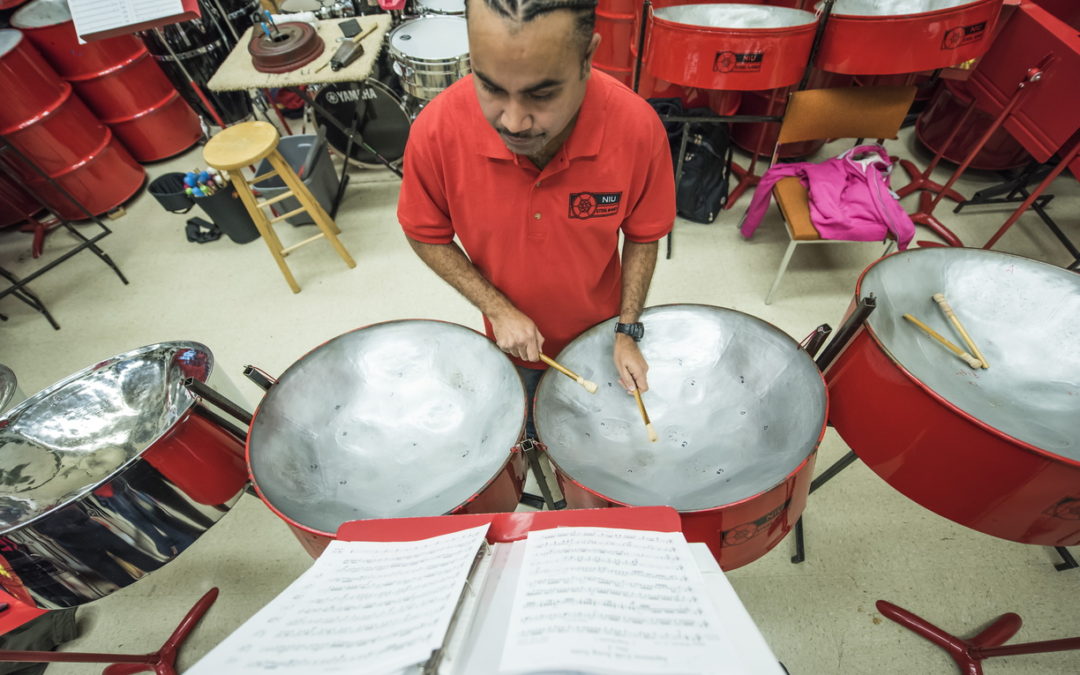 Liam Teague, Northern Illinois University Professor of Music and Chair of Steelpan Studies has been selected as a Presidential Research, Scholarship and Artistry Professor. 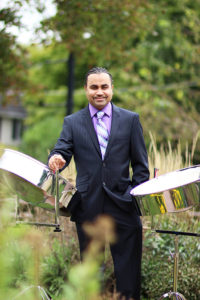 The award was created in 1982 to recognize faculty excellence in teaching, research, scholarship, artistry and engagement at NIU.  Recipients of the award are selected on the basis of significant and sustained scholarly or creative work, including the achievement of national or international reputation in their individual fields.

Teague is a world renowned musician who is hailed as the “Paganini of the Steelpan.”  A native of Trinidad and Tobago, he came to NIU as an undergraduate to join the university’s unique Steelpan Studies program and to play in the NIU Steelband, the longest-running steelband at any college or university in the United States.

Under the tutelage of program founder Al O’Connor and Cliff Alexis, Teague excelled as a performer and student and with their encouragement worked to become a professor in the School of Music and eventually direct the steelpan program, which to this day is the only program in the nation that offers undergraduate and graduate degrees in steelpan performance.

“Originally, I didn’t want to teach,” Teague said.  “I wanted to focus on being a performer and a composer, but Al O’Connor saw something in me and he groomed me to take over when he retired.  Once I started teaching it opened new doorways to me and a respect for the teaching profession.”

Teague has performed all over the world, and had the honor in 2015 of performing with the National Symphony Orchestra at the Kennedy Center for the Performing Arts in Washington D.C.  He has also performed with the St. Louis Symphony, Taiwan National Symphony and Czech National Symphony.  In his native Trinidad he received the Humming Bird (Silver), one of the nation’s highest national honors in recognition of his service to culture.

School of Music Director Janet Hathaway credits Teague with not only being an excellent instructor and musician, but also with achieving the rare goal of increasing awareness and his instrument.  “Professor Teague has elevated this relatively young instrument and its pedagogy to a level where his graduates teach and perform across the United States, in the Caribbean, and Japan,” she said.  “They follow in his path as performers, teachers and champions, and Professor Teague frequently performs with former students.  His stature and teaching are such that NIU’s program continues to build on its strong reputation and earn greater prominence.”

“His profile as a performer and composer and his ability to attract excellent guest artists and collaborators ensures that his students, and the NIU community, are exposed to musicianship at a very high level.”

Teague is the third faculty member from the School of Music to win this award, joining Jan Bach (1982) and Stephen Duke (1999).

The NIU Steelband will next perform with special guest Victor Provost, Sunday, April 22 at 3 p.m. in Boutell Memorial Concert Hall on the Music Building on NIU’s main campus in DeKalb.